Not Me! Monday! Easter Weekend Edition! Not Me! Monday! is, as alwasy, created by MckMama. And we are still praying for precious Stellan. Go check her blog out!

Welcome to Not Me! Monday! Easter weekend edition!

I did NOT go to the mall on Saturday to buy all our Easter basket fillers. I am way more prepared than that. I did NOT cringe over the prices of little sweaters for Emma that she will only wear once. I did NOT find one at Old Navy that was half price because it had a stain on the front. I did NOT look at it, and think, "I can get that out!" buy it, and go home without any sort of a backup plan for if I was unsuccessful. Marty did NOT say that he didn't think it would come out, and I was NOT completely successful at getting the stain out! Also, I did NOT do a little dance when I showed Marty that I did it. That would have been rude.

I did NOT get frustrated with Ben during bath time because he kept standing up and sitting down fast to splash a ton of water around. I did NOT just pull him out of the tub, throw a towel around him and put him in the naughty spot, naked. I did NOT go back to get Grant out of the tub, and when I checked on Ben, I did NOT find him sitting on the floor, playing in a puddle of his own pee.

I did NOT send Marty to the store at ten o'clock at night because I forgot to buy the Raisinettes that we need to create Easter Bunny Poop on the floor. Safeway has NOT stopped selling Raisinettes, and Marty did NOT have to drive around for a while until he found a bunny-poop appropriate candy.

I did NOT lament to Emma about needing to potty train all the fairy tale creatures that come into our house, and threaten that if she ever loses a tooth and the Tooth Fairy poops on the floor, I'm going to make her clean it up.

The Easter Bunny did NOT poop on the floor AGAIN this year. 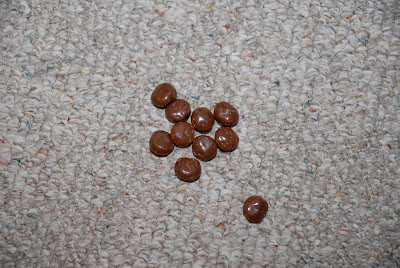 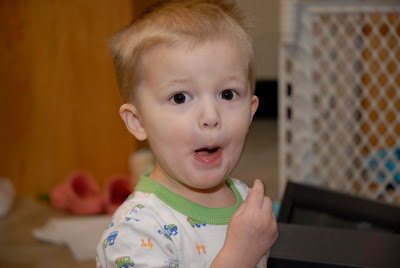 Grant did NOT get over his initial shock and decide that Easter bunny poop tastes a lot like Milk Duds and go for a second helping. 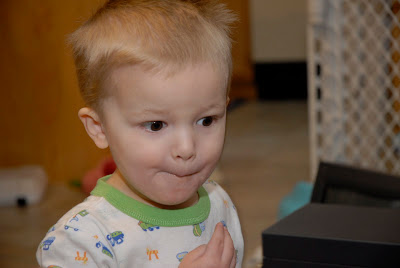 We did NOT force all the cousins to try and look happy for pictures before we let them go look for eggs. They did NOT cooperate for the first year, ummm, ever. 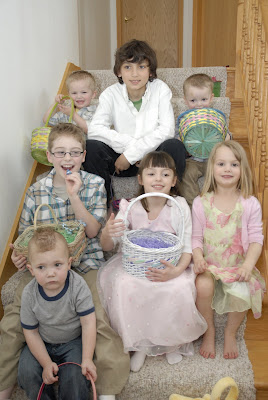 It was NOT raining sideways, forcing us to have the Easter egg hunt indoors. We were NOT hard pressed to find places to hide eggs for seven kids in the lower level of Auntie Ruthi's house. 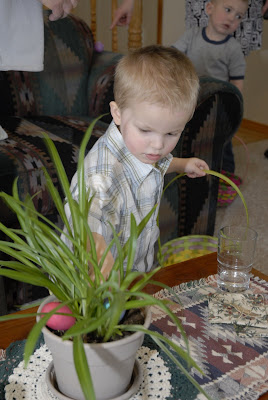 Ben does NOT have yet another bruise on his head that is very visible in the pictures. I do NOT fear that the kid will have large bruises in every holiday picture for his entire life. 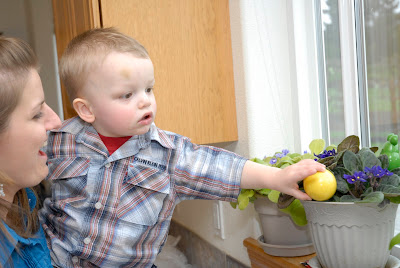 I did NOT capture this adorable Auntie/baby pic of Amy and Drew. 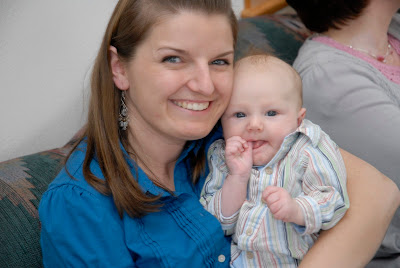 Amy did NOT catch Drew yelling at her. He is NOT saying, "Hey! Where's my eggs, huh? Just because I am a baby, you think I don't want to look for eggs?!?" 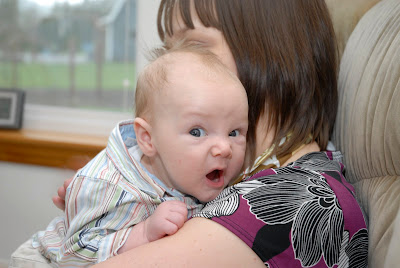 We did NOT get this cute, updated sisters picture adding Jessica. I am NOT calling this a "sisters" picture even though Jessica is not (yet) a sister, just because I hope she will be one day. (L to R, Holly, me, Jessica, Amy) 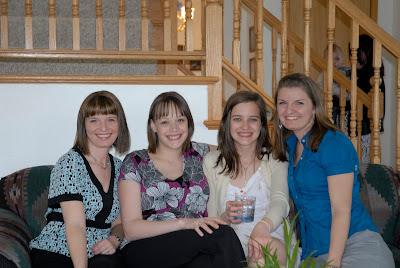 No, I did NOT just link Holly's and Amy's blogs up there. Sheesh.

I did NOT get home and decide not to fix any actual dinner since I was exhausted, I had a splitting headache, and we ate Easter dinner at two. I did NOT decide to have family movie night and feed the family microwave popcorn and chocolate bunny heads for dinner. 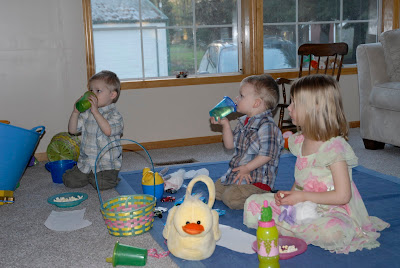 Tiffiny at The story of our life is NOT saying, "Hey! Our living rooms are the same!"
Monday:

This is NOT the most embarrassing Not Me! Monday topic yet. I did NOT come really close to not posting it.
I am NOT so desperate for a good conversation with a friend that if I suddenly have to go potty, I will just cover up the mouthpiece of the phone so that he/she does not know what I am doing. I did NOT attempt that this morning, and find myself not just needing to go number one, if you catch my drift (wink, wink.) I did NOT decide to flush later, knowing that flushing would give me away. I did NOT finish my business without my friend knowing anything.
Fast forward a couple of hours.
Those of you who read my blog often and/or know my children did NOT just groan reading about my bathroom experience, then reading "Fast forward a couple of hours."
You are NOT correct that the story doesn't end there.
I had my cousin Joell over today. During our nice girly chat, Grant did NOT come up to me with a very wet hand and say, "Mommy, big rock?" I was NOT confused as to what he was talking about. When he asked for a kiss on his hand, I was NOT smart enough to say, "I'm not kissing it till I know why it's wet." I asked him to show me the big rock he was talking about, and he did NOT lead me to my bathroom, in the process demonstrating that he can now open doors easily, and show me the "big rock" that I had left in the toilet.
I am NOT so incredibly shameless that I am willing to blog about my own poop for a laugh.
I did NOT spend $60 in co-pays at the doctor today, certain that Ben had and ear infection and suspecting that Grant might too, just to find that they are teething.
I did NOT do and I-told-you-so song and dance for Marty, since I have told him that Bluetooth is cheaper than getting a ticket for talking on a cell phone while driving here in Washington.
He did NOT get caught for speeding through a school zone while talking on a cell phone (to me.) He was NOT pulled over right in front of his sister's house, and was NOT being ticketed just as the school bus came, dropping off his niece and nephew, and his whole experience was NOT witnessed by his sister, too.
My husband, the insurance agent, was NOT driving without current proof of insurance in his car.
I did NOT laugh and laugh at that one.
(OK, in his defense, the road is long and suddenly goes from 50mph to 40mph, and almost immediately enters the school zone at 20 mph. He was still slowing down, and entered the school zone at 32 mph. And he was on the phone with me as I was telling him about the boys' doctor appointments, so I am not mad at all. I completely understand. Yes, he deserved the tickets, yes, it sucks that they total $395, and yes, I am going to make fun of him a lot for it, but I understand it could have happened to me just as easily.)
I am NOT hoping for an easier (and cheaper) week this week.
- Tiff probably should have been cleaning at 8:44 PM

Thanks for the entertainment w/all the things you did NOT do this week. Poor Marty how embarassing I am glad you are NOT going to remind him of this.

I have run the water in the tub to disguise the toilet flushing but am not totally sure if it works. Too funny. LOL

Oh yeah, I've done the whole not flushing while on the phone thing too! I think we all have and just won't admit!

Thanks for the laugh tonight. And I LOVED the Easter pics. Looks like you all had a fantastic day! And I agree... it was raining sideways yesterday. It was literally a DOWNPOUR at one point. (I think I am only about half an hour north of you by the way!)

Youare so stinking funny!! The stain is so me! The procrastination..me..And yes, our living rooms are the same! Friday and Saturday I will be selling all my junk.

and the whole insurance card thing is FUNNY!!! until he runs for mayor and they ask him about it.

LOL! Thanks for the laughs. I want a copy of the sisters picture please! You remember that Mom got pulled over in my driveway for speeding in a school zone too!

HAHAHAHAHA! Don't feel bad I did NOT post about crotchless panties on my blog last week, but they were NOT supposed to be like that. If we can't laugh at ourselves and share with the world what would we blog about?

Hahahahaha - I did NOT read this whole thing! It was good to see what you look like. ;)

So, for once, I am going to just leave this one alone!!!

"Like sands in the hour glass, so our the days of our lives!"

OHHHH my gosh what a Not Me! Monday list!!!!
I laughed so hard at some of those. Thanks for sharing!!!