It has been a DAY.

A day of tattling, whining, tattling, yelling, tattling, complaining, and tattling.  My eye is twitching and even the cat has figured out that leaving me alone is really the safest option right now.  This is not one of those days filled with joy and wonder of life viewed through the eyes of children, I am just ready for them to go to bed.

I was in the kitchen making dinner, when I heard a bicker starting.  I firmly believe that parents who involve themselves in every sibling spat are setting their children up to never be able to resolve conflict on their own, so I kept chopping chicken and waited to hear the inevitable escalation.  When Emma came into the kitchen and started with the "Mooom?!?"  I took a deep breath before I answered her.

"Mom, could you encourage Grant a little?  He's drawing a lollipop and he doesn't think he is doing a great job, but he is doing really well.  Do you think you could give him some encouragement so he will feel better about his drawing?"

The concern in her voice sucked the remaining air out of my lungs, and I looked at her in awe.

It is nice to have those little reminders every once in a while, amidst the challenges of four kids and the fighting that goes with that, that they really and truly do care about each other.

Ben tried some encouragement of his own, "Gwant, that really is a good drawing.  You are still a good draw-er, even if you are not as good as me!"

OK, it's still a work in progress.
- Tiff probably should have been cleaning at 5:22 PM No comments: Links to this post

After close to eight years straight,

countless hours and hours of my life,

many, many, MANY accidents involving bodily fluids on my legs and feet,

I don't even want to know what we did to the landfills of our country,

changed the very last diaper I will ever change on one of my children.

(and the heavens open, the angels sing, and the Great Beam of Light comes down, basking me with Glory and Peace and a much nicer smelling house)

I had all these plans for this time, rolling around in the buckets of money we would save, re-decorating my house with the extra time on my hands, and being filled with so much awesome at the new stage we have finally reached in our family.  Instead, all the kids are going through a growth spurt at the same time, so all my buckets of money are going to food (seriously, one breakfast recently was two dozen eggs, a whole pineapple, a double batch of pancakes, and a whole package of bacon; and that was just the kids, Marty and I didn't eat,) which just leads to  even more trips to Costco with one more boy who pees.

- Tiff probably should have been cleaning at 10:38 AM 3 comments: Links to this post

Even the Government Knows About Our Crazy

I was recently having a conversation with my friend Kristen and we were talking about the square footage of our houses.  Now, our house is small for America's standard for housing six people, but we make do.  I thought our house was 1,300 square feet, but then Kristen said her house was 1,300 square feet, but her house has two living areas, and I just know it's bigger than mine.  So I went on a  hunt to see what the square footage of our house really is.  Not that it matters, but I was curious.

Being that we live in an older double-wide mobile home, it's a perfect rectangle and measuring was easy.  I measured the inside of the house, and included the walls and came up with 1,102 square feet.  Marty said that was wrong because I needed to measure from the outside, but I don't think there is any way that I missed a whole 200 square feet just in the exterior walls.  So I hit up the county assessor's website and checked, and it said our house was 1,323 square feet.  I looked up Kristen's house and according to the assessor, the square footage is identical to ours at 1,323 square feet.

It is really weird that it's the exact same number, right?.  Let's focus on that weirdage and not the fact that I actually looked up a friend's house on the assessor's website, m'kay?

I went back to the assessor's page for our house, and out of curiosity, clicked some of the other tabs.  Didja know that there's tons of info available for every house on that site?  It's really interesting.  I looked under the "Property Image" tab, and was surprised to find a recent picture of our house, it looks like it was taken last spring or summer.  The van is there, so we were home.  I'm going to ignore the fact that somehow I didn't notice someone photographing our house.  You can't tell from the picture, but the entire driveway area is fully fenced as well, so there's no way someone could just do a drive-by-picture.  They actually entered our property and I didn't notice.  Maybe I was busy cleaning up pee. 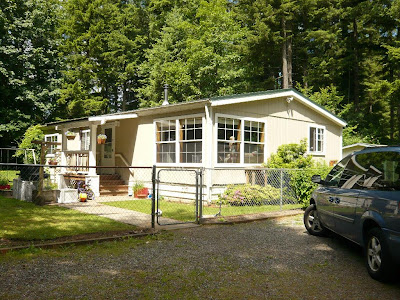 I was happy to see that amazingly, the flowerbeds looked pretty recently weeded and the sidewalk was relatively clear of toys and bikes.  Of course, there is the ever-present grass growing in the driveway, but whatever.  I like our house.  It has very cute curb-appeal for being a 23 year old mobile home, don'tchathink?

Then I looked a bit closer.  If you click on the picture, you can enlarge it a little and see what I saw.

Do you see it?

Imagine my shock and laughter that erupted so loudly that everyone came running when I discovered that the county assessor's website has a picture of my cute little house, all sunny and cheery and looking adorable.

With Drew standing in the windowsill.

Not only do I have this blog to document the challenges of raising this spirited child, now the government has photographic evidence as well.

Only my child.
- Tiff probably should have been cleaning at 12:36 PM 3 comments: Links to this post

Today in a Nutshell

Today was typical, but different in that I intentionally wrote things down that were funny and/or cute so I could blog them.  Here is today, in a nutshell.

This morning, in the mad rush to get Emma out the door and to the bus, I found Drew (a.k.a Jack Jack) who had made little steps out of his dresser drawers, teetering at the top trying to reach his backpack.  While I am used to his antics, the memory of climbing my own dresser as a child and having it fall and being trapped underneath came rushing back.  Luckily Purposefully, their dresser is long and wide instead of tall, so the danger of it tipping was quite minimal.  But still.  It's like he wants to go to the hospital again.

In true Jack Jack style, each of the four steps was perfectly spaced out from each other in an even, symmetrical stair-step pattern.  He's like an OCD Evel Kenevil.

Overheard this morning at the breakfast table:

Ben:  "I found grumpy eyebrows on you."

I almost choked trying not to laugh.  Ah, the joy of five year old twins.  I do have to say, I'm really proud that they are using their words.

Emma was perusing her baby book this morning.  Her lovely, wonderfully scrapbooked album of memories, perfectly preserved and kept right next to the twins' empty scrapbooks, which still have the cellophane wrapped around them.  Those are right next to the empty space that Drew's scrapbook might someday go if I ever buy one and/or get photos printed from his first year of life.  Ahh, the progression of having four kids in four years.

Anywhoo, Emma was looking through the pictures, and exclaimed, "Oh, here's one of me crying with Daddy!"  I lovingly responded, like the best mothers do, "he's probably picking on you."  She came back with, "let me see here.  Yup!  he IS picking on me!"

Photographic evidence that the need for us to save for our kids' future therapy started really early.

We went to Costco.  Yeah.  My lovely husband met me on his lunch break, and we had a hot date with Costco hot dogs and a cart full of little boys.  We got what we needed and as soon as we hit the checkout, Jack Jack predictably announced that he had to go potty, which set off a long string of boys exclaiming their need to pee.  Marty innocently asked, "do you want to take them?"  to which I replied, "no way, Jose.  I don't want to take them to the bathroom, are you nuts?"

So he offered.  And as he was taking the kids out of the cart, he said, "now there is one rule.  Don't pee on each other, OK?"  The man in line in front of us laughed, and commented, "that's a good rule right there."  I responded, "dude, if you only knew"  "well, we haven't always had the best of luck in this place."

Marty took them potty.  I didn't ask how it went, but everyone seemed in good spirits and not reeking of urine when they came out of the bathroom, so I'll call it a successful Costco bathroom trip.


We picked Emma up from the bus, and headed straight out to get some groceries.  On the way, I asked her, "How was your day today?"  She responded quickly, almost like she was out of breath even starting.  "Well, it was a good day, but I got my feelings hurt at last recess because a boy in Kindergarten made a sand castle at first recess, and by second recess it was gone, but I was building a big sand castle and he thought that I messed up his castle, but I didn't do anything, it was gone when I started building.  But I built the biggest, most beautiful sand castle ever, and I went to go get some rocks to decorate it and he stomped all over it and wrecked it."  Her voice wavered, and her eyes filled with unshed tears.  I immediately responded, "oh, baby!  I am so sorry, that would hurt my feelings, too."  The twins were listening from the back of the van, and commiserated with her, Grant saying, "that's not fair, he shouldn't wreck your project!"  Ben, calmly in his little-Ben way, said, "Emma, when I go to Kindergarten next year, you show me who he is, and I'll have a talk with him."

And this Mama grinned from ear to ear all the way to the Green Barn.

In another conversation, Grant asked for something at the Green Barn.  The Green Barn is our local produce stand, it's awesome and fantastic and we love it.  Anywhoo, Grant wanted "that thingy that I don't remember.  But it's like Brussels Sprouts, but all scrunched up like leaves hooked together."  I was intrigued.  After carefully searching the Green Barn, he realized what he was wanting Savoy Cabbage, so we bought one.  Now I have to figure out what to make with it in the next few days.