My Life or His Life?

(This post was originally published at whatislovely.com so I am moving it here. It's been a while since I blogged, so I'll have it here in case you wanna catch up on who I am now. Or, who I was when I wrote this.)

Nice to meet ya. My name is Tiff, and I am so honored to be a part of this amazing group of women who have become my family. They are the sweetest, kindest, most loving and Godly women out there. And for some reason, they are allowing me to be a part of this, even though I tend to blog about poop.

I had four kids in four and a half years. Potty training twin boys (and another boy who was born just two years later) involves a whole lot of bloggable moments about pee and poop. If I had a nickel for every time I have been peed on in a public bathroom, well, I would still only have less than a dollar, but at least I would have something to show for it, rather than just clothes that were wet with pee.

Anywhoo. I am married to my wonderful husband Marty, and I stay home with the kiddos, mostly. Except for when I'm working as a wedding photographer. And except when I babysit extra kids, because really, six isn't much more crazy or loud than four. Oh, and when I'm working for an IT company doing administrative stuff. Really, I guess I'm a work at home mom. The kids are all potty trained now, so have no fear, there will be very few blog posts about children's bodily functions. It's no longer funny that I have to remind the boys "you may pee on a tree, but you may not try to poop on it. Now put your pants back on and come inside." I am so thankful we live in the country.

Thankfully, Yah saw fit for me to go back, and I leave soon to return to my beloved Kenya for a two week trip. My best friend (who just so happens to be my husband) will be going with me this time, which will be a wonderfully different experience and I can't wait for him to meet my Africa family, and for him to experience what I did when God totally and completely wrecked my life and started the process of making it His life, the one He had chosen for me. I know it sounds horrible to smile at my beloved and say, "I hope God totally destroys you!" but that's what I want for both of us. I want Him to destroy us, destroy everything about us that is of this world and to make us more like Jesus. You can't get there without completely shattering what is of this world first.

The kids are staying home, although they long to go with us at some point, it's not time yet. Some day, we dream of a family mission trip. We desire above all else to raise children who can see the big picture, who know that life is much more than the longings of the American dream filled with fancy cars and flat screen tv's and the latest tech gadgets. We want to raise kids who love to serve, and to honor God in all they do, and who put others first. We don't want to live in Americanized Christianity, where an hour a week on Sundays is good enough. We want to give. We want to serve. We want to put Him first in all we do and in all we say.

I was listening to a wonderful speaker by the name of Ray Vander Laan recently. Google him. You will be blessed. One thing he said that so stuck with me is that many of us think that belief is enough. Now, I know that salvation is through faith alone, and belief and faith can sometimes be synonymous. However, we tend to think that belief is enough.

Now, let me ask you this. Does Satan himself believe those exact same things? Of course he does, he was THERE! He saw it all, he watched it happen, he knows it better than we do. Knowing that an event happened doesn't save you, it is what you do after you know the Truth that does.

Are you believing in God, yet refusing to do what He is calling you to do to further His Kingdom? I don't want to live in comfortable Americanized Christianity. To be honest, I lived like that for many years, claiming the promise of salvation and then doing whatever I wanted to do with my life, paying no regard to God or anyone else. I would call out to Him when I was in trouble, begging Him to save me from whatever I had gotten myself into; and ignore Him when times were good, but be pleased at all I had done for myself.

Anyone else been there?

I am not fully there yet, but the information has been trickling slowly from he head to my heart, changing the way I see life and the world we live in. I want to see it through the eyes of Yeshua, who walked on this earth to show us how to live our lives. I know that Yahweh is God, I know that Yeshua is His son, and that He died for me. For ME! And because I know that, I know that He lives and I know that He loves and I know that He has a plan for my life, and I would be a fool to think my plans would be better than His because I'm an ignorant human and He is God. Sometimes when you rock the boat, when you go out on a limb, when you do any of those other Christian clichés that basically tell people that you are different and weird, people question. And that's fine.

People can question our decisions to go to Africa, to give up pork and shellfish and eat Biblically clean, to follow Torah and celebrate the Feasts just like Jesus did. But we are ok with it. We are much more concerned with what God thinks of us that what those around us think. Yes, we fail him daily, and we are so thankful for grace. But we want to walk like Yeshua, talk like Yeshua, eat like Yeshua, feast like Yeshua, and live like Yeshua, from the inmost part of our souls. More than anything in the world, I want to be like Jesus. I am nothing but a messed up sinner, saved by grace, who yells at her kids too much and sometimes smells of pee, but thankfully, God can change the world, and He is using me as a part of His great and mighty plan. I don't know why, but I'm honored to be a part of it. I invite you to come and join in. Ask Him how He desires to use you, how He wants to bless others through you. I promise you, whatever He desires for you is so much better than you could ever think up on your own.
- Tiff probably should have been cleaning at 1:14 PM No comments:

It's amazing where this blogging journey has taken me.  I know, I don't blog much anymore, and I know that I keep saying I plan to do better but I never end up consistently posting.  Well, for the three of you who are left, thank you.  Thanks for sticking it out, and thanks for reading.

Almost three years ago, I posted this story about a dream I had about the author of a blog I just love, Sarah Valente.  It was crazy, and rather than just messaging her saying, "Hey I know you don't know me, but I had this crazy dream about you," (which would sound rather stalker-y,) I decided to blog about it publicly (because clearly, that is the much less stalker-y option.  Clearly.)  Well, she wanted to see where the traffic was coming from and read my post and (thankfully) thought it was hilarious.  Bloggers can appreciate the public posting of private matters, and she wasn't offended (or freaked out)in the least.  A bloggy-friendship was born, which turned into a facebook friendship, which turned into a secret corner of the Internet where a little group of bloggy and facebook friends gathered to lift each other up, to pray together, to study His word together, and to giggle and just be us.  I know it sounds nuts, but I developed some of the most incredible and meaningful friendships with these women whom I had never met in person through the Internet.

The thing is, when you build a relationship based on Christ, it's real.  It's meaningful.  And it's awesome.

So where is this going, you ask? 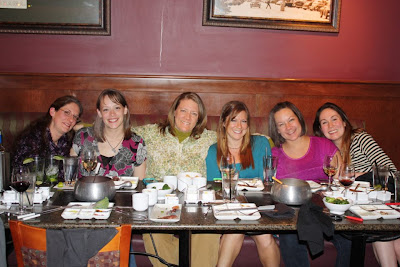 From left to right:  Beth, myself, Cindy of Over Koffee, Christi, Renee of Mi Querida Familia, and of course, Sarah of Kingdom Twindom, shiny hair and all.

We were missing a few, including Ellyn of Profoundly Seth and Ashley of Adventures in Twinderland, who couldn't make the trip.

Yes, I might be shamelessly name-dropping.  But these are my peeps, yo.  And I couldn't be more proud to be a part of this group.

We sat in Renee's house, and we chatted and laughed and drank wine (but not too much) and studies the Bible and worshiped the One who created us and brought us all together.  It was fantastic.  I loved every minute and I can't wait to see these amazing ladies again.  It has been said that "if you show me who your friends are, I'll tell you who you are."  Well, I really feel like I am totally unworthy of being included in this amazing group of women, but I'll take it.  Go ahead, read their blogs.  They are awesome.  And besides, it'll fill the time till I blog again. ;)
- Tiff probably should have been cleaning at 10:00 PM 1 comment: