Outside the box thinking.

The ability to rise up against failure and try again and again.

All things that are fantastic qualities in an adult, right? I do believe that the above list would describe a very successful person.

But when those qualities are highly present in children, well, things get a bit trickier.

"Emma, how did you get on the roof of the shed?"

"OK boys, I understand you just wanted to make a tightrope high up in the air. But pulling out your dresser drawers to walk along the edge is really not a good idea."

A couple weeks ago we had our first injury-related ER trip. Drew, who will be two in January, has been nicknamed Monkey-Boy for his abilities to do his crazy stuff. Either he is the most fearless creative problem solver of them all, or he has the power of levitation, but only when no one is looking.

Well, he decided to demonstrate his money-like skills and showed his wonderful ability to climb out of his crib. But the skills he had in climbing out, he lacked in, well, landing. I was sitting on the couch eating lunch when I heard the THUNK! (short pause) "WAAAAAAAAA!!!!!!!!!"

Slightly panicked and in shock, I scooped up Drew off the hardwood floor of the boys' room, hearing the twins exclaim in surprise, "Mommy, he crawled out of his crib!" and took him into the living room to calm him down. In less than a minute, he started vomiting.

I called the doctor, who said to go to the ER. I called Marty to meet us there, and packed up the kids and left.

Emma had strict instructions in the van. "Tell me right away if he starts shaking, and don't let him go to sleep, OK?" She was on it, my little administrator, loving being in charge of something. She played games with him on the way to the hospital, and he laughed and giggled and had a great time.

We finally go in to see a doctor, who checked him out and declared him to have a concussion, but nothing more. All during the visit the doctor kept jumping every time Drew tried climbing up on a chair, and seemed a bit surprised that we weren't doing the same. "I don't even jump when he's dancing on a table anymore. I will move quickly if he's up on the kitchen counter trying to get a glass out of the upper cabinet, but this is nothing."

We left with instructions to try and keep him from hitting his head again, but after watching Monkey Boy climb all over the room, the doctor left us with encouraging words.

Why thank you, thank you very much.

Marty took the kids home and I went on a quest to find something to keep him safe at night. He is way to little to be in a big boy bed, and the fact that he shares his room with his twin brothers would leave three destructive boys on the loose and while there is the chance that they would use their powers for good instead of evil, creating an alternate fuel from dirty diapers, boogers, and the gunk that collects in the windowsill; it is much more likely that they would re-enact the circus and the tightrope act would only be the beginning.

So I went hunting for a crib tent. I headed to the fancy baby store in town, hoping that it would be a quick search. No luck, not only were they our of the tents, they told me that they cost $80.

I don't happen to have $80 lying around, and especially since there will be and ER bill coming, I cringed at the thought. I tried Target, no luck. By then I was really wishing that I had not declared it to be jammies-all-day day, and although I had thrown on a t shirt and jeans before leaving for the hospital, I had not showered, put on make-up, or actually found a shirt that fit well. I was uncomfortable, looking like a slob, stressed out, and cranky. Really not a good combo.

I gave up and headed home. Drew now sleeps in his playpen, as the sides are higher than the crib. The playpen is pushed up to the front of the crib and the crib mattress sits on the floor in front of it as a landing pad in case he tries to launch himself again.

Two weeks later, I am still on the hunt for a crib tent, and I still haven't found $80 lying around. In the mean time, all the boys are loving the fact that there is a mattress on the floor.

I did make a call to the doctor's office as I was told by the ER doc to have a follow up visit. I spoke with a nurse (not our regular nurse) and asked if we could skip it and just do it over the phone, since he was fine. I was told that the most important part of the follow up was so that the doctor could talk to the child about sports safety so this wouldn't happen again.

After explaining to the nurse that he was one and didn't have an attention span long enough for a nice sit down chat, she passed me off to my regular nurse who had no problem with me not coming in. (Although, in all fairness, they have a new all-digital medical records system, and she might have been afraid that Drew would come in and re-program the computers so that every child's name is Elmo and add a John Deere soundtrack. He's smart like that.)

I'm hoping that the onset of fall will make my blogging easier and get me back into the routine. However, the children that I am so blessed to call my own are exploring their creative problem solving, perseverance and determination, and actually causing my hair to leap from my head on it's own without even being pulled. ( I stole that phrase from Kingdom Mama, it made me laugh. And it's so appropriate!)

But it does make sitting still at the computer for a half hour at a time reasonably difficult, of not dangerous. I really don't want anything else covered in crayon, broken, or set on fire. OK, nothing has been set on fire yet, but I'm sure that day is coming.

My Grandpa set his house on fire as a kid. But that's a story for another day.
- Tiff probably should have been cleaning at 11:38 AM 3 comments:

Linny over at A Place Called Simplicity (a fabulous blog that I follow regularly) does a fun post called Memorial Box Monday. I highly recommend you check her blog out, she is an amazing woman with a wonderful heart for God. I really want to meet her in real life and hug her neck and sit and have a long chat.

In a nutshell, a Memorial Box is a place where we can have physical reminders of God's faithfulness to us. In a longer version, it is explained HERE.

So here it is, my very first Memorial Box Monday. You know, on Thursday. Cuz we all know I don't follow rules well.

Grant was born with clogged tear ducts in both eyes, but primarily the left one was a problem. He also has a roseacea (sp?) birthmark, or a red spot on his left eyelid. The doctor said that the clogged duct was something that usually heals itself on it's own, but if it was still there after a year they would have to do surgery. The birthmark might fade or it might not. I knew it would either resolve itself or not, so I didn't worry about it. I'm not really a stress-out-about-things-you-can't-control person. 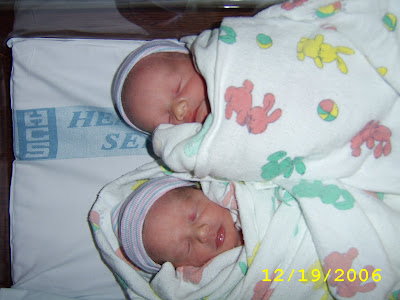 (Ben is on top, and Grant on the bottom)
I trusted God that His will would be done. I prayed that Grant would be safe, and that either resolution (either healing on it's own or surgery) would work well and that there would be no complications. I prayed for Grant's safety and God's will be done. 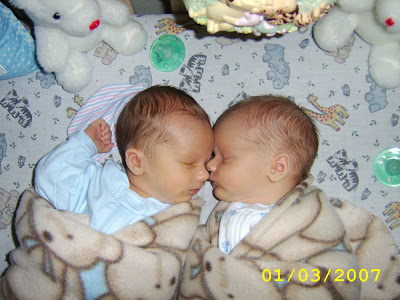 (Grant is on the left, Ben on the right)
After a year, he was still having problems. Every morning he would wake up with eye goop that would sometimes bind his eyelids together so that he could not open one eye. I was constantly getting warm washcloths to loosen up the mucous and clean it, it was necessary several times a day. We made the decision to do surgery when it was apparent that it was not going to resolve on it's own. 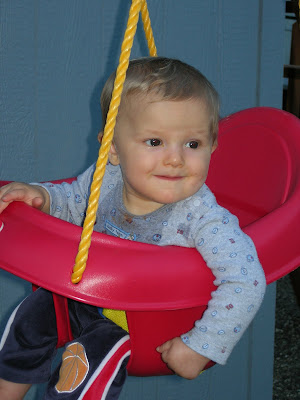 We had the initial pre-surgery consultation, and I was pleased with the doctor and comfortable with the procedure. I hated the thought of my sweet fourteen-month-old being put under anesthesia, but I trusted God that all would be well. We scheduled surgery for the following Thursday. 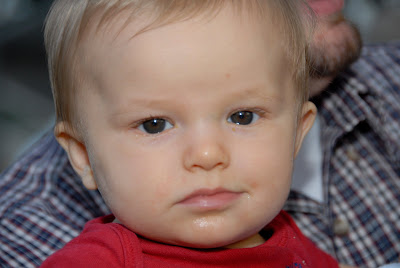 It suddenly hit me, two days before Grant's surgery, that I had not prayed for healing of Grant's eye, just for God's will and our peace and Grant's safety. That night, as I put my sweet boy to sleep in his crib, I prayed over him for healing of his clogged tear duct and to be able to cancel the surgery. I went to bed that night not really thinking anything of it, and still believing that God would do His will and that I would be content with whatever the outcome was.

Grant woke up the next morning with a perfectly clear eye. None of the goopiness that had plagued him for the previous fourteen months was there. I looked at my bright eyed boy for the first time, finally without the crud and redness that went with the constant wiping and cleaning, and heard God speak clearly to my heart: "All you had to do was ask." 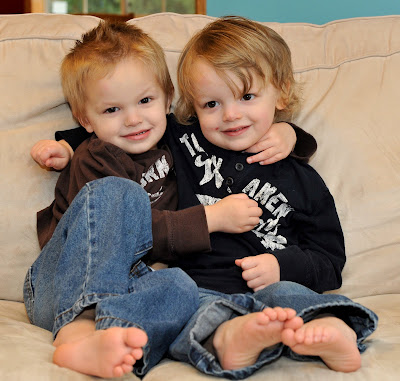 (Grant on the left, Ben on the right)
I tend to do that, to pray that things will work out for the good of all involved, and that I will have peace regardless of the outcome, but I don't tend to pray for what I want. I don't know why that is, that I don't ask for what I want, but that is something that I have been working on. God wants to give us the desires of our hearts, but we have to ask.

I canceled the surgery, and Grant's eyes have been clear ever since.

In our Memorial box I have placed the appointment card for the eye doctor, as a reminder of Grant's healing.

And I'm learning to ask. I don't know why I struggle with it, but I do. I am reminded of the Sunday school song I used to sing as a kid, "ask and it shall be given unto you, seek and ye shall find, knock, and the door shall be opened unto you, hallelu, hallelujah."

Thank you, Lord, for showing me your strength and your power and your love. Help me to recognize you when you are at work.

Head on over to A Place Called Simplicity to see more Memorial Box stories!
- Tiff probably should have been cleaning at 12:19 PM 2 comments: