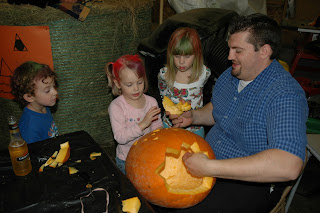 Last night we attended Little Bearfoot Farms First Annual Pumpkin Carving Contest and Chili Cook Off! We had a blast, the party was held in our friends (Gordon and Tracie, of Ribeye fame) shop. We all started off with the chili, each family brought a different chili and we all had an official blind taste testing and voting. There was a prize for the best chili, and a "Boobie Prize" for the last place chili. I made a new Rachael Ray recipe that I really liked, called Autumn Harvest Chili. It was a little different, including mushrooms, zucchini, bell peppers, a jalapeno, black beans, corn, onion and beer. I knew it was a little bit of a risk bringing veggie chili to a gathering of farm guys and firefighters, but I thought it was good and wanted to give it a try. During the taste testing, I heard several comments like, "Wow, the vegetable one is really good!" Along with, "I don't like mushrooms, so I skipped it." Darn chili discriminators. I am very proud to say, I now hold the distinction of having the worst chili in the chili cook off! Woo-Hoo! Seventh place out of seven! I won the boobie prize! The prize wasn't new boobies, though, and I have to say, I was disappointed. Hey, you can't nurse this many kids and expect things not to... deflate, if you catch my drift. I did win a can of Dennison Chili and a huge eraser labeled, "For Big Mistakes." The winner was Tim (Congratulations, Tim!) and I told him that he needs to be prepared, he is going down next year! Check out my prize-winning chili, doesn't it look good? 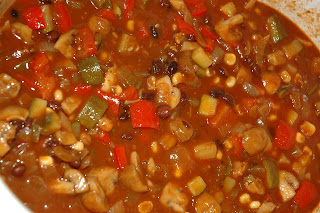 We all carved pumpkins with the kids, the boys really liked carrying their pumpkins around and dropping them on the floor. They were so proud to have their own little pumpkins, and by little, I mean, pumpkins the size of their heads. Ben's hit the concrete about eight times before it busted open and we gave it up for pig food. Emma enjoyed scraping the guts out of her pumpkin and even made up a little guts song that she sang for a while. The boys joined in on the messy guts action for a little bit, but got bored quickly and wandered off. Tracie had some spray in hair color, so of course, the boys could not escape! Ben loved getting his hair sprayed red, and giggled and ran his hands over his head till the red dye had stained his hands and was caked under his nails. Grant was not as thrilled about the green 'do he received, but Emma loved her pink and purple stripes. 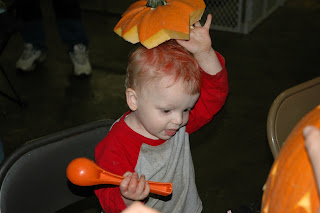 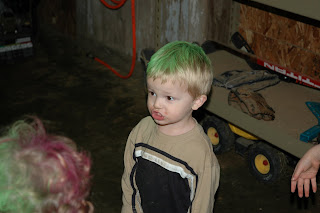 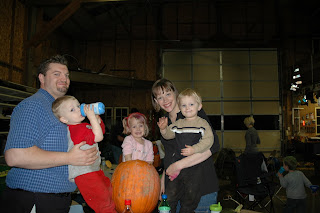 I, personally, am the kind of mom who thinks that filthy kids are kids who have had a great time, so bring on the dirt! According to this rule, the kids had the greatest night they have ever had last night. They came home so completely covered in grime from hair dye, pumpkin guts, hay, and general dirt from being in a shop on a farm that you could not see their skin tone. Unfortunately, we got out late last night, and the boys were melting down before we left, so since we arrived home an hour after bedtime, we just gave them the good ole baby-wipe wipe down, changed them and put them to bed, filth and all. Today is forced bedding washing day, since they woke up a lot cleaner than they went to bed, so I can only imagine the grime covering their sheets.
Well, I am off to do laundry and try to work on our next year's chili entry. Tim, love ya buddy, but it's on, now!
- Tiff probably should have been cleaning at 10:32 AM

Congrats on the boobie prize. Hopefully Dan will be home next year and we will have a real competition.

Did I mention that John, our resident carnivore, actually liked your chili? But I don't think he knew it had mushrooms. I won't tell him if you won't. :)

I would sign up for a boobie prize if it really meant I would get some too. Nursing 4 kids is hard work for them I will admit. Your chili looked yummy. Cute hair on the boys too:o)