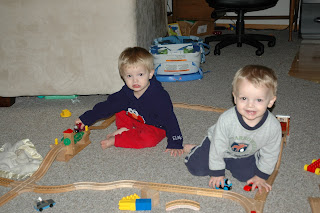 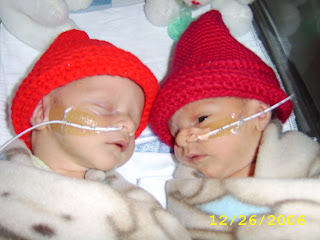 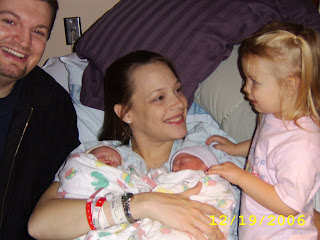 I cannot believe it has been two years already. Two years of life with twins, two years that these precious boys have been a part of our lives. However, it is even harder to believe it has only been two years since I only had one child, since laundry could be done on the weekends, since I could run into the grocery store without spending an hour in the parking lot organizing kiddos, breaking up fights, and buckling carseats.

Awwww Tiff I love labour storys... and boy you WERE quick!!!!

Well I hope the boys, and you have a fantastic day. Happy birthday Grant and Ben.

I can't believe I have to miss the party! I almost cried last night thinking about it! I love you Grant and Ben! I'll see you on Monday! -Auntie Kelina

Happy Birthday Grant and Ben! Luvs and kisses from your favorite Aunty!

Tiff,
As I sit here and read this, I am almost in tears! I so hope I don't miss this last one. I can't believe the emotion that I feel when reading this story. I love you boys!! Have a great birthday. I am sorry to miss it!!!

Happy Birthday Bubbas!! I love you both so much and enjoy being your Daddy.

Happy Birthday Grant and Ben! I did get to hold you when you were only a month old and you were just precious. What a joy you are to your family! Also I do like labor stories too and a woman who has had a baby should be listened too. Hope this next labor blesses you w/only kind hearted nurses who get you know what you are talking about.
Love ya,
Amy