After Drew was born, we had a lot of people come through our house. I found this lovely scarf in my bathroom a while back, but I had not been in that bathroom for a while, so I had no idea when it showed up or whose it was. I held onto it for a while since I thought I knew who it's owner was, but I was wrong. I am hoping the owner of this scarf reads my blog and will claim it. However, there is a catch. I am holding it hostage and there will be ransom. The owner must come to get it, bring dinner and stay for a visit. It seems strange to be so demanding when I do not know who I am demanding this of, but it's my blog and I get to abuse my bloggy power however I want. 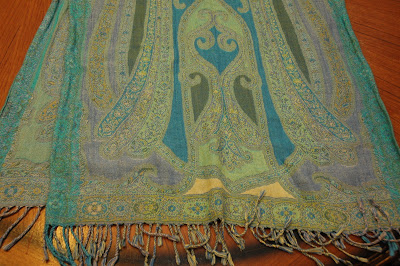 Isn't it pretty? Part of me is hoping the owner of the scarf does not read my blog and then I get to keep it, but the thought of a free dinner that I don't have to cook myself and adult interaction with someone (anyone) is a teensy bit better right now.

In other news, I started to teach the boys how to drink milk form cups yesterday. Teaching Emma was easy, we put her in the clean bathtub with a cup and she practiced by drinking bathtub water. Kinda gross, maybe, but it was no cleanup and really, what kid has not drank bathtub water? I attempted that theory with the twins, but they took the cups of water and dumped them over each other's heads.

I gave them cups at the table last night and put about a half inch of milk in each. I showed them how to drink it, and they had a few spills and shocked faces (if you tip the cup up too fast, the milk will go up your nose. Every time.) But then they seemed to get it. I gave them each a hand towel and they wiped themselves up as they went. By the end, Ben was almost a pro, using one hand and actually getting some milk in his mouth. Grant liked putting the cup to his chin instead of his lip and tipping it back, soaking the front of himself repeatedly until he discovered the great fun of tipping the cup upside down and watching milk run across the table.

Note to self- do not attempt things like this while Marty is working. You have no one to help clean up or hold Drew while you bathe the sticky, milk-covered children. And if you hold Drew while the kids are in the tub, the floor will get soaked while the kids are playing war with the squirty bathtub toys and you won't notice, since you are on the other side of the bathroom playing "this little piggy" with the baby. Not a good plan.

- Tiff probably should have been cleaning at 10:29 AM

Hope you are all well!! xx