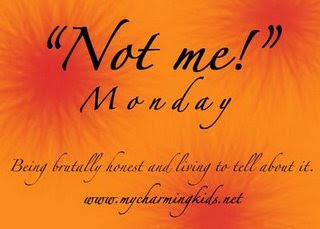 Welcome to Not Me! Monday! This blog carnival was created by MckMama. You can head over to her blog to read what she and everyone else have not been doing this week.

I did NOT save the empty box of my favorite girl scout cookies on the counter all week, in an attempt to subliminally convince my hubby that I still had some left and did not eat two boxes in two days.
I did NOT serve dinner late on Thursday, simply for the fact that the kids were cute and cuddly and I didn't want to move to fix dinner, so I stayed on the couch till 5:30.
I did NOT decide to start painting the living room while it was still somewhat snowing so that we could not open up windows to air out the house well, and ended up with a splitting headache and trying to keep the kids in the other end of the house to try to not expose them to nasty chemical inhalants.
I was NOT so swayed by the really cool presentation for shower cleaner a the Home Show that I bought two bottles, and then cleaned half of my shower with glee. I also did NOT purposely ignore the other half just to see if I could tell the difference like the sales guy said.
I did NOT find two leftover cookies from last night's desert, and instead of trying to split two cookies between three kids, eat them both myself at naptime when there were no witnesses.
I did NOT glare at my daughter, just for a moment, when she told me that she really, really, reallyreallyreally wanted sixty-eight little brothers and sisters.

- Tiff probably should have been cleaning at 10:23 AM

So what color is your living room????