Welcome to Not Me! Monday! This blog carnival was created by MckMama, head on over to her blog to see what she and everyone else have NOT been doing this week!

This week (and for a few weeks before this one,) I did NOT blatantly lie to my parents. To their faces, tell complete fabrications that I made up. And we aren't talking about little white lies here, these ones were whoppers.

I was contacted by my dad's work a while back, and they told me that they were throwing a surprise retirement party for him. I had two jobs, getting addresses of people to invite, and get him to the party.

I did NOT throw Ben under the bus and tell them that he must have stashed my Christmas card list, and I needed theirs to help re-create it. When you lie, you have to tell lies that very well could be the truth.

I did NOT tell them both (and yes, I kept my Mom in the dark for a while, too) that Marty had won tickets to see the Nutcracker ballet and we wanted to take them as a Christmas present. I did NOT tell them that I had a gift certificate to a restaurant that was close to the party location, to get them in the area, even though it was out of the way of the ballet. And most importantly, I did NOT tell them that Amy (my photographer sister-in-law who I work with) had gotten a call about shooting a reception at the party location, and I needed to run there really quick to check it out.

My Dad did NOT think that we were going into a place where they were setting up for an event, and think it was sheer coincidence that he saw someone that he used to work with twenty years ago. and then someone he works with now. And then, his boss and his wife. The look of sheer confusion on his face was priceless. I am so very impressed that I was able to pull it off, I really thought that I would blow it before we got there. Whew! Lying is exhausting! 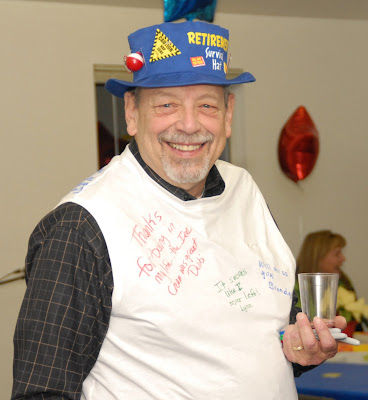 My Dad's boss is NOT a really cool guy, and he did NOT give my Dad some great going-away gifts to thank him for his years of service. Since he was always so regular and dependable, well, you know... 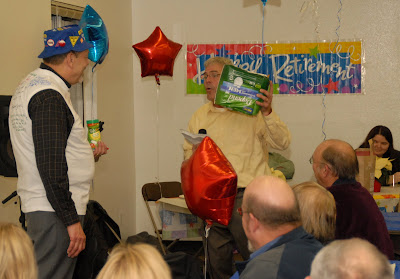 I did NOT laugh by tail off when the office manager said she was really particular about paperwork, and wanted to get all the details out of the way, so she served my Dad his pink slip... 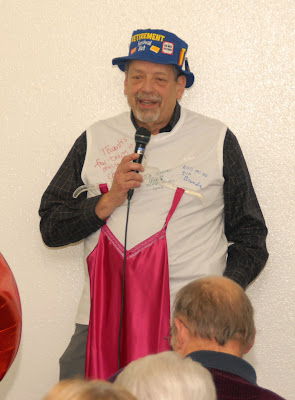 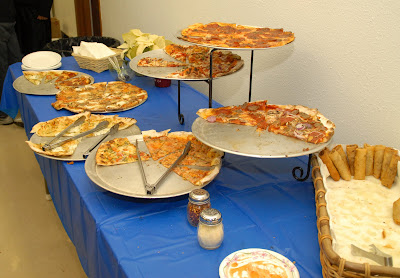 All in all, it was a great party. Thank you, Leon, Wendy, Brenda, and the rest of the Greater Seattle Concrete team, for honoring my Dad this way. You put on a great party! I'm thinking I'll have pizza for breakfast...
- Tiff probably should have been cleaning at 9:05 AM

Glad you were able to pull it off. Great job!!!

I know lying is technically never a good thing, but when it brings someone as much joy as it obviously brought your father (just look at that smile!!!), then it was well worth it!

I heard it was a great party!
So glad for your Dad.

THat is so neat! Looked like a fun party, what a hilarious picture of the depends haha! Hope he has a great retirement!

So Who Is The Crayon Wrangler? said...

Love the pink slip! Great "Not Me" entry, I am following you now to read more of your wonderful writing!

Poor Ben... I knew his stashing addiction would get used against him eventually...

I really dont know anyone who could say no to wood fired pizza though!

I was busy yesterday learning how to turn on and load apps on my new iPod Touch so I missed this yesterday, but I couldn't resist saying what a GREAT LIAR you turned out to be. What a wonderful story, and I'm so thrilled for your dad. I retired last year (I can still say that until 2010) and love it. I hope he does, too!!