Welcome to Not Me! Monday!

As always, this was created by MckMama, and you can go check out her blog to see what she and everyone else have NOT been doing this week.

I was NOT shocked and amazed at my two year olds' strength when I found this: 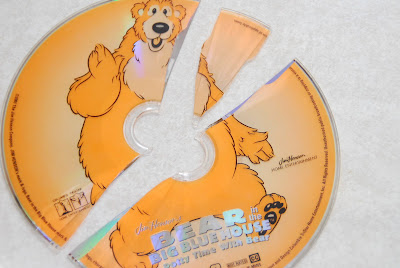 Now, I must ask, have you ever tried to break discs before? I have done it when they used to send out the mailings with the free AOL trials. Those things are hard to break. They are so stinking strong, people could use them to build houses and space shuttles and the like. The Big Bad Wolf would not be able to blow down a house made of CDs, I tell ya. I did NOT feel just a little bit, umm, weak when I realized that two two-year-olds could easily accomplish what I found to be next to impossible. I did NOT suddenly have a flash-forward to what later years will be like, since my children are stronger than me a mere two and a half years after I brought them into this world.

I did NOT think that maybe they were trying to tell me something with their choice of movies to destroy. Perhaps breaking "Potty time with Bear" was a sign that I should not be pushing potty training, and they were happy with diapers for a while. Which is fine, I mean, I LOVE having three kids in diapers and I truly believe there is NOTHING better I could be spending over one hundred bucks a month on.

But then, this did NOT happen. 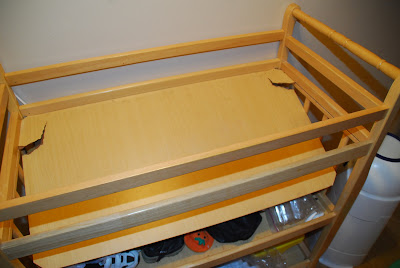 I was NOT horribly disappointed that the changing table I bought on clearance at Wally-World five and a half years ago was not high enough quality to outlast all four kids. I mean, really, just because two-year-old Ben is such a tank that he weighs the same as five-year-old Emma, he cannot be held up by a flimsy piece of particle board? What's this world coming to that we cannot rely on China to produce quality furniture that can last a lifetime?

On a slightly less sarcastic note, I did NOT just a teensy bit enjoy the forced rest and relaxation provided by Grant being hospitalized from pneumonia.

I did NOT lay down for hours on end, just holding my sick boy while he got better. And I did NOT savor every minute of it. 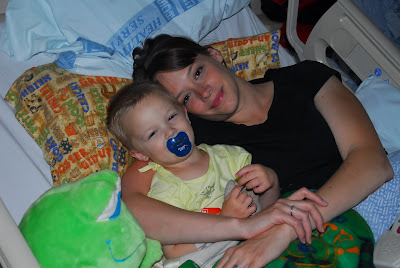 These were taken a few hours before we were discharged, so he is looking much better than he had been oh, 24 hours prior.

He is NOT stinkin' adorable. 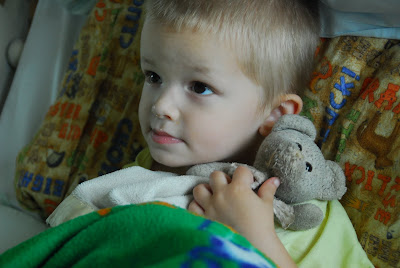 I do NOT have the cutest kids in the world.

Yesterday we went down to my parent's house to celebrate some birthdays and make apple cider using apples from my dad's mini apple orchard in his backyard. During the course of the day, my brother took my camera, as he often does, and got a few pictures which I will share in another post. However, he did NOT take a picture of his own bum. 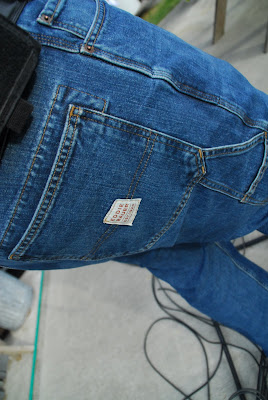 I am NOT posting this picture up on my blog for all to see, and leaving out the story that went along with it. There is NOT an actual explanation to why this picture was taken that I am deciding to leave out for now. I am NOT going to offer the condolence that I only tease people I love, so my brother can relax in the idea that I must REALLY love him to tease him to this extent.

I would NEVER do that. I mean, really. Would I really say, "You take pictures of yourself with my camera, I will blog them however I want!"? Nope, NOT Me!

What did you NOT do this week?
- Tiff probably should have been cleaning at 10:54 AM

Very cute kids and a cute post. There are so many things I did not do.

AWWWW... sweet grant is SO cute!! I think thats the best photo Ive seen of him. totally get what you mean about the hospital visit. it IS sort of relaxing to just sit there and do pretty much nothing.

Yes, it's true: you do NOT have the most adorable kids in the world. And you do NOT look pretty relaxed and adorable, either!

I am a first time visitor. Your children are adorable. If you get a chance please check out my non profit, Parenthood for Me.org. Our mission is to provide financial and emotional support to those building families through adoption or medical intervention. We need help spreading the word.
Thanks.

And your camera would NOT refuse to take a picture of your bum, and I would definitely NOT blame that on your bum size being bigger than the camera could focus on...