This weekend marked a historic day. It was our friends' annual chili cook-off and pumpkin carving contest. Some of you who have followed this blog from the beginning remember this post from last year, where my Autumn Harvest Chili took the Boobie Prize for being the worst chili in the cook-off.

About two weeks after that one, I started working on my recipe for this year. I found the recipe for Rachael Ray's Buffalo Chicken Chili and decided that it was The One. My entry for this year, my winning chili, the Greatest Chili Of All Time.

The cook-off is held in Gordon and Tracie's shop at Little Bearfoot Farms. It was a blast last year, and we were really looking forward to it again this year.

There were eight different chili recipes in the cook-off this year. All were very good, and all very unique. 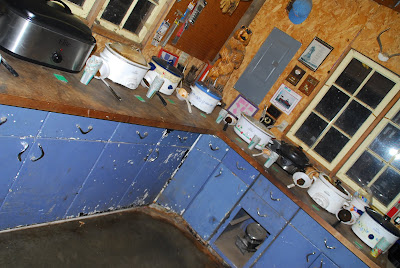 My dear friend Tracie, the most creative person I have ever met, made this mushroom garden. Isn't it cool? 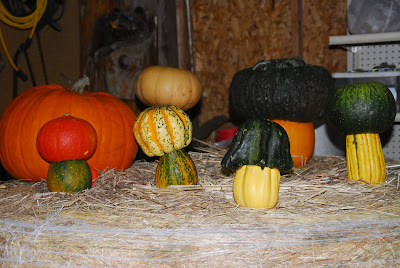 We sampled all of the chili recipes, and were amazed at the variety. We all voted for our favorite and least favorite, and went back for seconds (and thirds, sometimes fourths) of the ones we found most tasty.

My personal favorite was made by mt friend Erin, and her recipe included chocolate, coffee, and beer. And it was delicious!

We ALL ate chili. 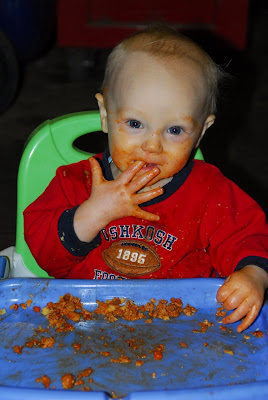 And we all loved it! 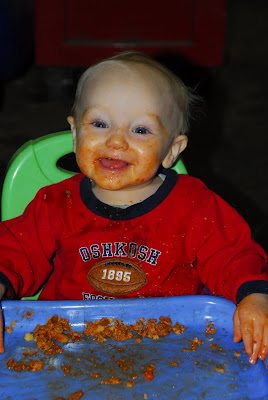 Finally, the votes were tallied, and this year's winner was crowned. Our MC and host Gordon awarded the prizes. Congratulations, Brad, on your victory! (Obviously no one told Marty that you have to win to be in the winner's picture...) 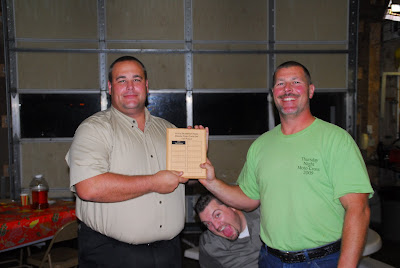 And my reign from last year was robbed from me by Jennifer, who won the Boobie Prize. My fabulous chili was only one vote away from last, and we found out later that Brad messed up his vote and voted for Jenn's chili when he meant to vote for mine. I should have won the Boobie Prize, but it was stolen from me. It's a chili-scandal. 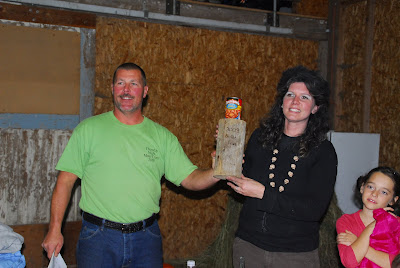 My chili is like cilantro, you either love it or you hate it. There are always a few who love it (I didn't bring home very much leftovers!) but those who like the more traditional chili tend to dislike mine. With a passion. I may have to come up with something different next year. Or maybe not. See, I don't like traditional chili, so trying to make and perfect something that I don't like would be difficult and not too fun for me. Maybe I will continue on my quest to have the last place chili every year, since there are always a few people who love my chili. Maybe I'll write to Rachael Ray again and see what she says. Hmmmmm... the wheels are already a-turnin...

Next came the pumpkin carving. Marty drew a pumpkin outline on the ground and Emma illustrated what she wanted her pumpkin to look like. I was actually really impressed with her picture. 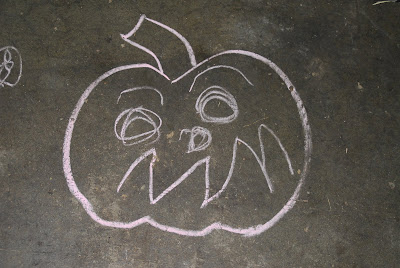 Over time as people started scooping and carving, Little Miss Fickle-Pants changed her mind, and the pumpkin changed... 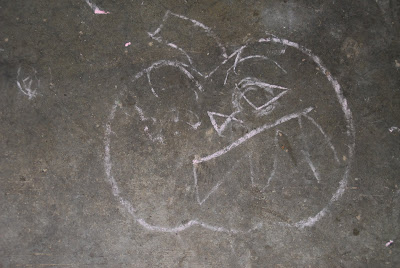 And for the first time in history, Grant actually got dirty on purpose. He dug into his pumpkin and played with the seeds. It didn't last long, but we were very impressed with the fact that he was willing to reach in there in the first place. He's not really an adventurous type yet. But he's getting there! 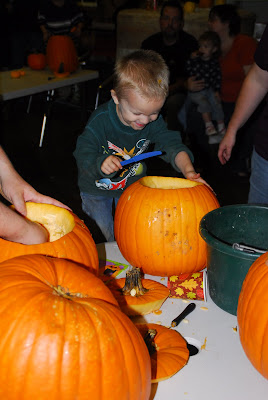 Emma wanted to do hers herself, and had a great time. You know, till she got bored and we finished it for her. 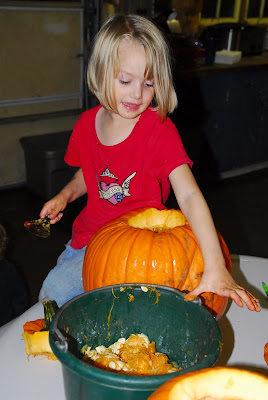 We carved for the kids however they wanted. "Do you want triangle eyes or circle eyes? Happy face or angry face? Big teeth?" and these were the results: 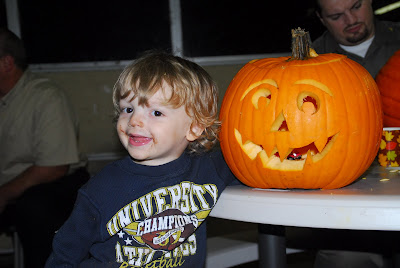 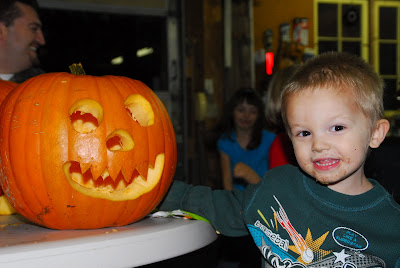 Emma's took a bit longer, and Marty had to demonstrate the faces he could carve on it. At least, that's his story. 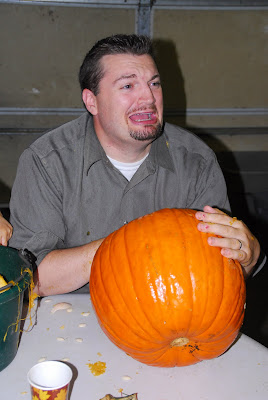 "I want a straight top of the mouth, and spooky teeth bottom mouth. And eyebrows. And triangle eyes, and a triangle nose. No, Mommy, not like that, like this. Yeah, like tha... no, like, up a little. A little more. Now more." "Emma, you want his nose between his eyes?" "No, down here a little, yeah right there." 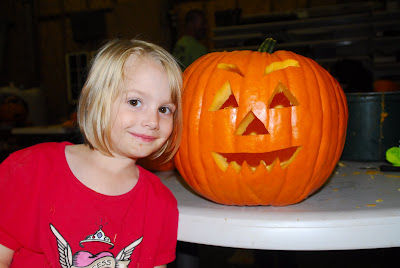 Drew got some Auntie Holly snuggles. Or Auntie got some Drew snuggles. They sure like each other! 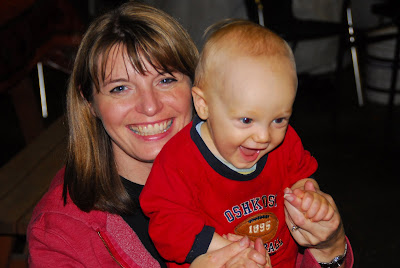 As we finished up carving, the kids headed up to the hayloft to play. I heard a loud Emma voice calling, "Mom! Boys are in the cage!" So I headed up to rescue them. If only I could do this at home... 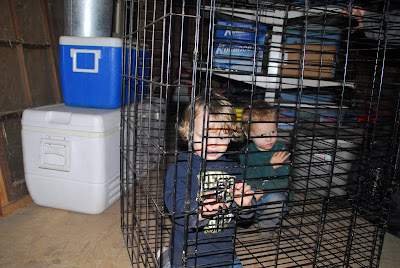 Don't worry, the door was unlocked, they got in there themselves, and got out themselves when they were ready.

The pumpkin guts were fed to the pigs, who were delighted with the meal. My kids loved watching them! 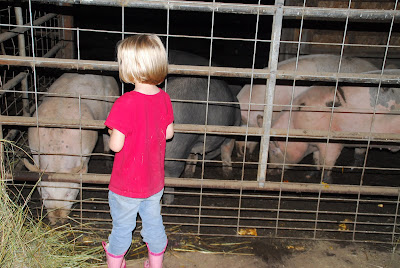 Grant stood there for quite a while, watching them nose around for more. I could have left him there all night, I bet. "I watching the piggies, Mommy!" 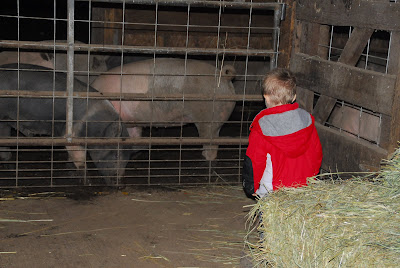 Thank you, Gordon and Tracie, for another great night. We look forward to next year, where I will reclaim a prize!! (But I'm not saying which one...)
- Tiff probably should have been cleaning at 9:21 AM

Sounds like so much fun! I love the face he was trying to carve.

Hope you chili does better or worse next year!

What a great party, and what great pumpkins! I think I would have loved the choco-coffee-beer chili myself, it just sounds good. Thanks for the wonderful pictures, Tiff. I love them all...

Wissa has a little sumpin sumpin for ya.. ;o)