1. Contrary to what I have been telling myself, the second day is not any easier than the first.

2. You must appreciate the baby steps in the process. And still appreciate these steps the second time that Ben runs to the bathroom, sits down and pees straight through his underwear.

3. Little boys (at least, my little boys) pee about every ten minutes. Logic would say that you should then put the boys on the potty every ten minutes, but it does not seem to work that way. They can sit on the potty for twenty minutes, and then get up, wash their hands, and go out in the living room and pee within 4.2 seconds.

4. Letting your child pick out their own undies is a great way for them to be involved. However, leaving them in the middle of the process to check on the other twin might lead to some interesting choices. 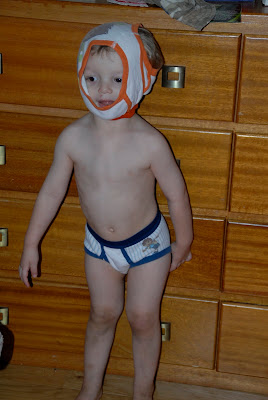 5. It may seem like a good idea to use all the candy that the kids have collected at the many parades they have attended during the summer, but it is really not a grand idea. Most of it is hard candy that will not be fully consumed by the time they pee on the floor again. M&M's are a much better reward.

6. Now is the time to bust out hand-me-down toys. Namely, if the kids have an older cousin who loved Thomas the Train so much that you were given a huge Rubbermaid tote full of tracks and trains, bring it out to use as bribery. It will work so much better than offering yet another hard candy that is slightly crushed from being thrown to the ground from a parade float. 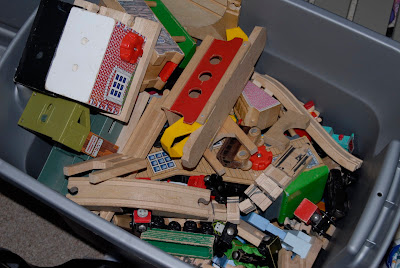 7. Choosing to spend some of naptime to build a really cool train track can help keep the little ones occupied, desiring more trains, and most importantly, off the carpet. 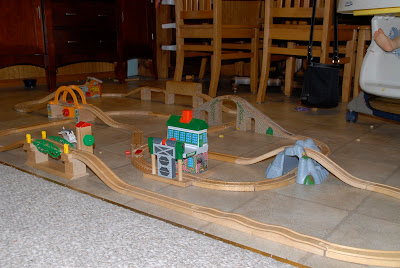 8. If your husband stops by to pick up his phone, sweet talk him into staying to let you take a shower. He might be at your house for twenty five minutes and have to deal with three accidents, giving him an entirely new perspective on the stress that this may cause you. And he might let you hog the computer after the kids go to bed, knowing that if you don't get a little down time you might just scream and run away from home.

10. Finding really old carpet cleaning solution in the back of the laundry room, after desperately searching for something that you can use to clean the urine out of the carpet, might actually make you cry. Maybe that one's just me.

11. If the boys once again refuse to sleep at naptime, do not be impressed when you walk by and catch a glimpse of one sitting quietly in his bed. Especially when you suddenly realize that the house smells strongly of baby powder. 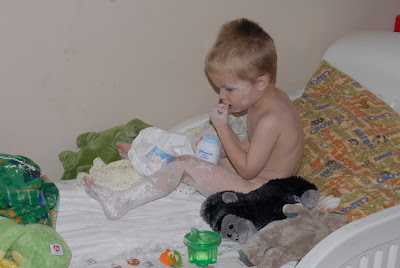 12. Remember that someone always has it worse. At least I don't have sextuplets.
- Tiff probably should have been cleaning at 9:20 AM

#9- vinegar... i emailed you a great website link last night. Check it for the 'recipe' you need :) Good luck. Stay strong. I love you :)

Wow, I feel for you. It's not easy that's for sure.

Keep going, you'll be so happy when it's over & you will have them potty trained.

i will pray extra for you this week.

Wow, I feel for you. It's not easy that's for sure.

Keep going, you'll be so happy when it's over & you will have them potty trained.

i will pray extra for you this week.

I'm not sure if that is Blue=Ben or Green=Grant in the pic with the baby powder... but I was laughing out loud when I saw it!

Let's get together sometime soon! I'll let you get a handle on potty training before forcing to venture out into the wild unknown... maybe in a couple of weeks? Don't forget we're coming down for an overnighter on the 21st...

That last one reminds me of when Shelby took a whole LARGE container of baby powder and nearly completely emptied it all over herself and her bed at that same age. She looked like a powder donut. Unfortunately, I didn't have the thought to get a picture. It would have been a great one. Hang in there.=)

I have to agree with Story: you ROCK! And you are chronicle-ing the whole journey so that when the twins are teenagers, you will be able to get them to do anything not to show them with undies on their heads, or baby powder encrusted feet...

Watching and laughing along with you, and glad I'm only virtually visiting you!