Happy Birthday to you, we went to the Zoo!

Monday we took the kids to the Woodland Park Zoo for Emma's birthday. We did this when she was two, and I was pregnant with the twins. (This was before I knew they were twins, I was just in awe about how big I was already.) We had such a good time we wanted to do it again. My brother and sister-in-law came with us, since they live close by, and it was nice to spend time with them and have an adult for each child.


The carousel was a hit. Grant did not want to go at first, but Marty dragged him up there and forced him on a horse. No, this is not abuse, this is how we do things with Grant. And he loved it. Some kids just need some encouragement. 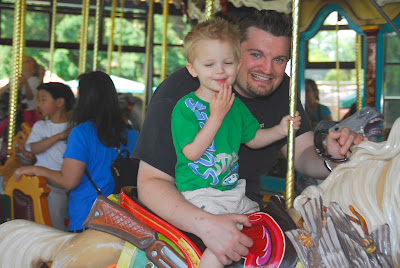 The penguin exhibit was different than the last time we were there, and the improvements were amazing. The kids loved it and we had a hard time pulling them away. 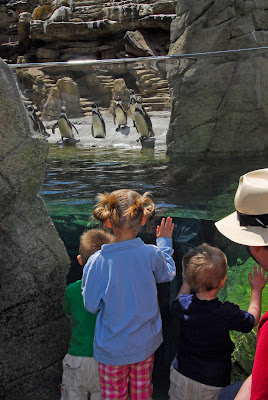 I made friends with this cute little guy, he is so pretty! 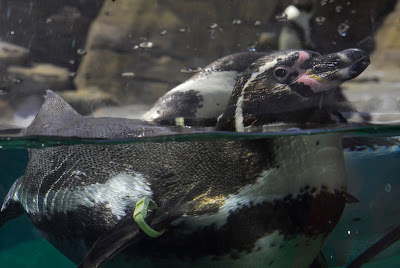 This is the only group shot I got of all four, and Grant is not to pleased. Drew is saying, "I thought you took me out to feed me, not to do that flashy-thingy Mommy does all the time!" 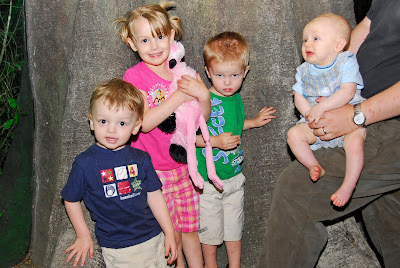 We had an alarm set, and at 2:11 p.m., we surrounded Emma and sang "Happy Birth-Minute to You!" Right outside the snake building. And we sang loud. Because that's what we do.
This is just turned five-year-old Emma, always the lady. Sitting like a man and picking a hippo's nose. She claims there were rocks in there, and she was just trying to clean it out. 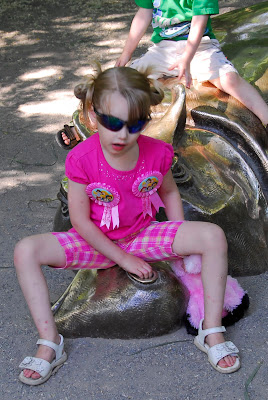 We saw gorillas. And then we had the "A gorilla is not a monkey" talk. It went something like this:
(some adult, I can't remember who): These are gorillas. A gorilla is not a monkey.
Grant: No, monkey!
Emma: No Grant, it is a Gorilla!
Grant: No, is a monkey!
Emma: It's a gorilla!
Grant: NO! Monkey!
Emma: Gor-Ril-La!
Grant: Monkey!
(At this point I walked away to get some more pictures. The people next to me were giggling, saying, "No, Monkey!" I pretended not to hear.) 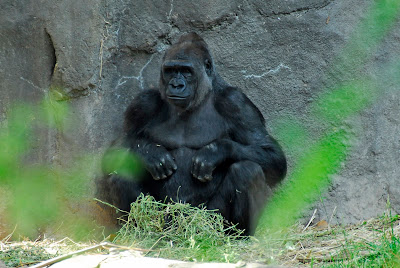 I could not tell if this gorilla was happy or drunk. 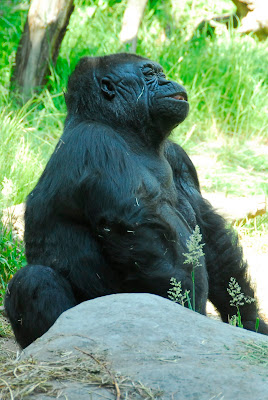 The kids each got to pick out a stuffed animal from the gift shop. Grant picked out a gorilla. And he named it Monkey. (Go figure!) Ben got a snowy owl, and Emma picked out a flamingo, but she kept calling it a penguin. Do we have any zoologists in our future? Hmmm...
Of course, the customary sit-on-the-fake-animal-and-go-for-a-ride shot. 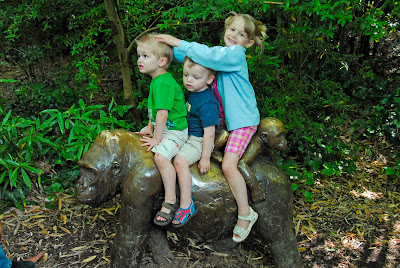 Which, of course, you have to do with all the fake animals. Our crew loved all these statues, and wanted to spend a lot of time climbing and riding. Ben decided to stake his claim, and would run up and yell, "My monkey!/lion!/hippo!/crocodile!" Here is our birthday girl on the lion. 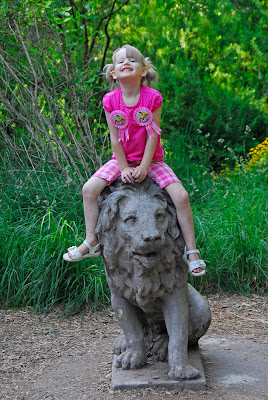 And the beautiful lioness. The male lion was sleeping and sprawled out in the grass. I did get a picture of him, but it's just his bum. And that's no fun. 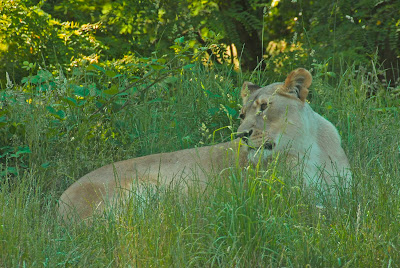 Baby Drew spent some time in the stroller, and most of the time in the front pack. He didn't seem to notice we were even at the zoo, unless we went into the tropical rain forest area where it was hot and humid. Other than that, he was a happy, content baby most of the day. Who can resist rolling down a big hill? Not my husband! And yes, the kids followed suit. And he thinks he was just "teaching them how to do it," but I know he really wanted to. 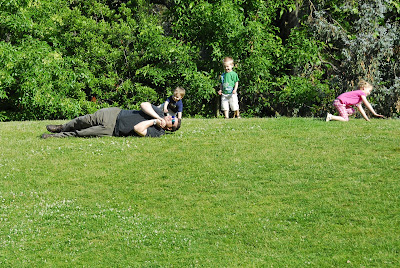 By the end of it, we had some melt downs, and the exhaustion was evident in our faces. And the kids were tired, too. 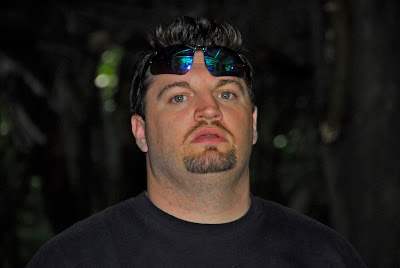 The twins were asleep soon after we hit the road, and we stopped for dinner part way home. Since it was Emma's birthday, she got to pick what she wanted for her birthday dinner. So she had a strawberry milkshake. Cuz you can do that on your birthday.
We got home at nine p.m., and were absolutely done. We took the kids for a quick walk to stretch out the kinks in their legs from the two hour drive home, and put them to bed. We did not move the rest of the night.
But in the car, on the way home, Emma said, "Mommy? This is the bestest birthday ever! I want to do that again!"
Mission accomplished.
- Tiff probably should have been cleaning at 9:34 PM

The hill had it coming! You can't just "walk by" a hill when it was obviously made to be a roll-down-me I'm awesome, you have kids so you won't be considered completely loony hill!

Next time you guys head down to the zoo let us know. We have a zoo pass & would love to meet you.

Looks like you guys had tons of fun. Reagan and I both loved the pic of Emma on the lion! Reagan says to tell Emma "Hi!" and tell Marty I say that the hill looked like fun!
Glad that Emma had the bestest birthday ever!

Kudos to you two for making memories!

I hear you Marty having the kids along is a good front. It looked like alot of fun. Glad Emma had such a wonderful birthday!!!!! And the Go-Ril-La reminds me of Tarzan. LOL

LOL glad I am not hte only one whose husband has to "show the kids how to do it" cough cough the slipping slide....

It sounds like you had a great time....minus the meltdowns of course!!! The kids are getting so big and are so beautiful Tiff; God Bless! I love the picture of the drunk monkey, errr...I mean happy gorilla!!!! lol Love ya, Christa HAPPY BIRTHDAY EMMA!!!!