I Can't Think of a Catchy Title. Sorry.

I woke up this morning, hearing the soft hungry cries of baby Drew. Lately, I have been going to sleep and Drew has been waking me up about five minutes later and fussing through most of the night, but this morning, I felt almost rested. I opened my eyes to look at the clock. It was five thirty am.

I never thought I would ever get to the point in my life that I would say, "Thank you, sweet Jesus, for letting me sleep till five thirty!" but I did. It was heavenly. That was six hours of uninterrupted sleep. Oh, how I needed that. Seriously, anyone who has read my posts over the last couple of days will know that the lack of sleep was wearing on me. Talking raccoons in different dialects? Yeah, I'm nuts.
I was a little offended that Brenda though she needed to suggest in the comments that I was going crazy and I might need to be medicated. Preposterous. However, she is my oldest friend in the world, so maybe I should listen a little.
But maybe not.
I think if Brenda has not figured out in the last nineteen years that I might need medication, she's the crazy one. Yup, nineteen years. I am not truly offended, but I like pretending to be since then I can rightfully post a picture of her thirteenth birthday party. 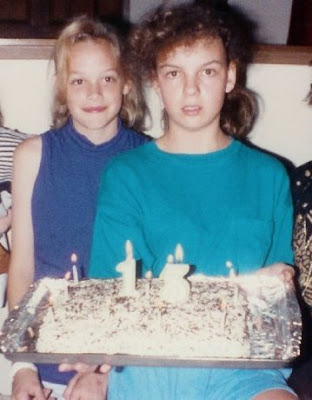 That's me and Brenda. I'm the blonde. It was 1990, and we were disappointed that we could not get our hair any bigger.

And here we are last year, with Jenn, who has been around almost as long. 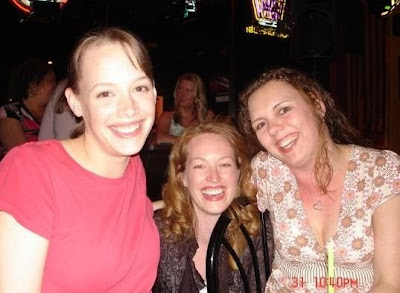 L to R, Me, Jenn, Brenda. And it's the angle, I do not actually have an enormous head.

Anyway, back to this morning. I got up before Marty left for work to get a shower, and had just turned the water on when the power went out. Remember we are on a well, so when we lose power, we lose water. Luckily for me, the plumber was out recently and swapped our reservoir tank for a bigger one, so we had eighty gallons before we ran out. I took the fastest shower known to man and tried to save the rest of the water for other things, like flushing toilets.

So that is why I did not blog this morning. I had a great morning with the kids, with nothing else to do we just played and had a great time. I think we should have no-power days more often.

- Tiff probably should have been cleaning at 9:18 PM

OMG, you with your blonde hair at that age screams Emma!

Isn't it crazy how we can get excited over "sleeping in" until 5:30 in the morning! Thank goodness Reagan i older now and sleeps in until 7:30!