Last night was Emma's Awana Grand Prix. I never did Awana as a kid, and I saw my brother do his Boy Scout Grand Prix every year (and was incredibly jealous as a child), so I was so excited for Emma to be able to take part.

Marty and I discussed at length how involved we wanted to be in the process. On one hand, Emma deserved a shot at winning, so we could do most of the car ourselves, with Emma's help and input. However, there was the idea that it was much more important to let Emma do it herself with our guidance, so that the creation was entirely hers (and that satisfaction of doing it herself would far outweigh the satisfaction of winning with a car her parents designed.)

It was a discussion for a while, but eventually, Marty had to go to work and I got to do it my way. Or, should I say, Emma's way. 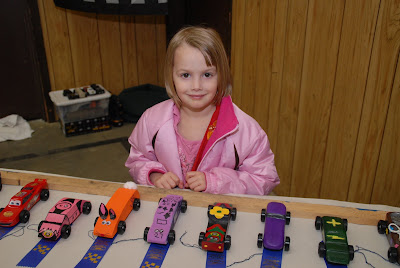 We worked together on the car, and it was fun. She designed the car, and I smoothed out the wavy edges on her drawing till we had it exactly how she wanted it. (They had the jigsaw at Awana for a couple of nights so a leader could cut out the design we drew on the block of wood.) We sanded together, and then she sanded by herself. She did a great job sanding her car, and she was so proud of her result.

We painted together. She got to decide what color paint to use, and went with an every-panel-is-a-different-shade-of-pink-or-purple scheme. I got to help, under her direction . She added flames to one side, and drew stars all over it with Sharpie. 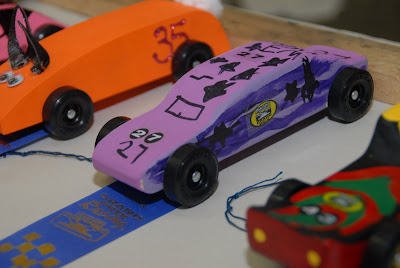 To see the joy light up her face was so worth it. She made this car all by herself. She was proud, and we were happy. 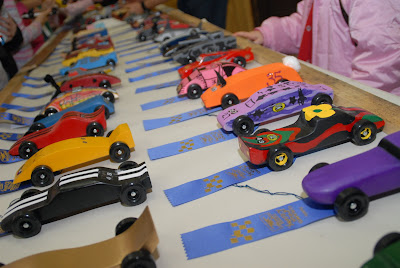 While we waited for the race to start, Drew found a new place to hang out and travel. 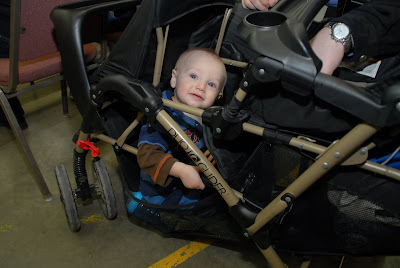 Hey, there's probably a lot of Cheerios down there. I don't blame the kid.

Emma raced in four different heats, and her car took second each time. 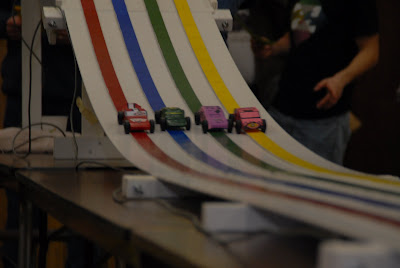 She didn't make the finals, and she didn't win a trophy. But she raced her own car, and even though she was disappointed that she didn't win, she was happy. She is already talking about her car design for next year.

Way to go, baby girl. You did awesome, and your car looks fabulous.
- Tiff probably should have been cleaning at 9:15 AM

Her car does look fabulous!

My boys didn't do Awana this year. We couldn't find one that would work for us after our move. They really miss it!