What We Do When We Are Bored

It has been a bit crazy around here lately. I know, it is always a bit crazy, but lately, well, it's been two bits crazy.

I still haven't found my new van, and I made the decision to return the Durango to it's rightful owners as I do not know how long I will be without a vehicle. I'm back to driving my own van, and hoping and praying that we do not break down on the road. Because of this, we have been sticking around home as much as we can.

But we are getting bored.

I mean, you can only eat cereal and watch so much TV. 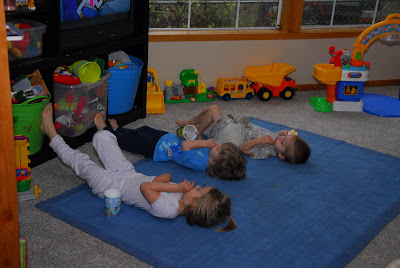 And you can only eat so many refrigerator magnets. 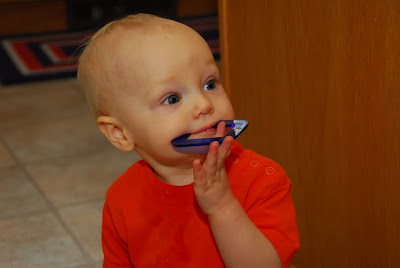 I brought in the little outdoor slide, which was great for about a day. When they started jumping off the top of slide and seeing who could fly the furthest, I said no. Some games are for outside, but taking outside games inside could get someone hurt. Then they decided to bring out all their pillows and blankets to make a padded area to jump off the slide onto, like the high-flying circus children that they are. ("Hey, Mom! I know you said we couldn't be trapeze artists, but now we have a net, see? So it's OK, right?") When I put the kibosh on that one, they made a "snuggle fort." My kids are the greatest! 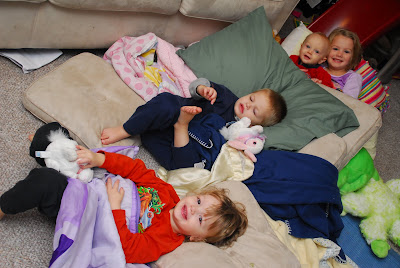 Many of you will remember that a few months ago, I tried potty training the twins. If you were not here for that experience, I'll make it easy for you. It didn't go well. We went diaper-free for seven days, and finally came to the realization that they just were not ready. They are only two and a half, and I know that's pretty early (especially for boys,) so we went back to diapers for a while. Well, Ben has been showing interest again. Like showing up on the kitchen with a wet diaper in his hands, naked under his pants. 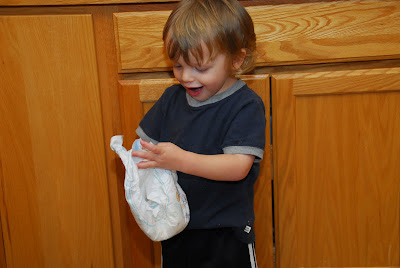 He was rather proud of himself, to say the least. 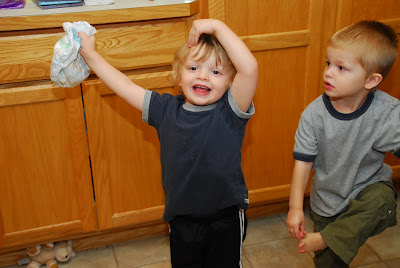 Yesterday morning, he came up to me and said, in his little Ben way, "Mommy, I go peepee, I go peepeeeee??" So off to the bathroom we went, where he went peepee in the potty and refused to put on a new diaper.

I let him pick out some undies and he was off, happily playing. He continued to go potty every ten to fifteen minutes on his own and stayed dry all morning. Wow, this is going to be great! I thought to myself.

I had invited the neighbor girls over for the day, as there was no school and the kids could have a distraction from the everyday routine. Of course, having a eight year old, two five year olds, two two year olds, and a ten month old wasn't exactly calm. Six kids in 1,400 square feet is just plain loud, no matter how sweet and well behaved these girls are.

Nap time came, and I put diapers on the boys and tucked them into bed. They were a bit riled up, and I heard giggling and banging coming from the room of the supposed-to-be-sleeping boys. I yelled one warning from the living room, and as the noise continued, I went in to intervene.

What greeted me from the moment the door opened was the assailing stench of poop. (Insert opportunity to remain calm and take deep breaths here. Immediately stop taking deep breaths, as the poop smell is nauseating.)

Ben had decided once again, that he did not want his diaper on, and had removed it mid-poop. He then proceeded to sit everywhere, smearing gobs of poop on every surface and then pee all over his bed. By the time I discovered this lovely little mess, he had smeared poop all over his sheet, his blanket, his pillow, and his Ted. He had gotten poop on his owl and stuffed rocket and then apparently decided that since they were dirty, he didn't want them, so he flung them across the room. The rug was poopy. His bed frame was poopy. And Ben, well, Ben was covered in poop.

I turned and left to gather my thoughts and inform the girls that they would need to work on their craft project with what they had so far, I was not going to get out paint for them until I had cleaned up the boys' room. Of course, the immediately ran into the boys room to see, and dissolved into a fit of poop-induced laughter.

I shooed away the pack of giggling girls, cleaned up the poop mess, changed Ben's bedding and tried to calm the boys down. Yeah, right. They eventually yelled and screamed for three hours, not napping at all. As a result, Drew did not get a good nap, as it is hard to sleep through someone kicking the wall right on the other side of your crib.

Today, the sun is shining, so I think we will be heading outside for a change of scenery. Maybe we will "go leaf-piling" as the kids call it.

Whatever adventure we end up with, as long as it doesn't involve poop, I don't care.
- Tiff probably should have been cleaning at 8:50 AM

Lordy, Lordy. This is the second poop post I remember in just recent weeks (or maybe months). Yikes, Tiff! Go back to looking for a van, it's much less difficult than potty training, don't you think?

Sorry to hear you haven't found a van yet. Don't worry something will come your way. We will start praying for you guys.