Not Me! Tuesday! Halloween Edition!

Welcome to Not Me! Monday! And yes, it is Tuesday. So sue me.

This Halloween, I did NOT decide to make the kids' costumes myself again. I do NOT do this every year, and it does NOT take up every available ounce of my energy and spare time for a couple of weeks.

It did NOT work like a charm, and the costumes did NOT turn out fabulous.

For Awana dress up night an Wednesday, I did NOT give my hubby the idea to go as a Hawaiian tourist. I did NOT tell him to put on his long socks with his sandals, just to complete the look. 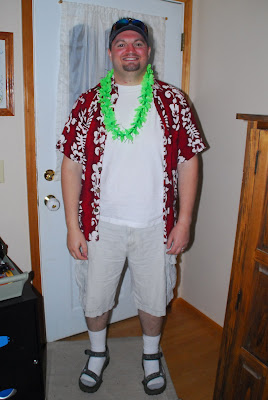 And I would NEVER put make-up on my husband to make it look like he had gotten a sunburn with his sunglasses on. And I most certainly would NOT blog about it. What kind of wife would do that? Pssssshhhhhhh... 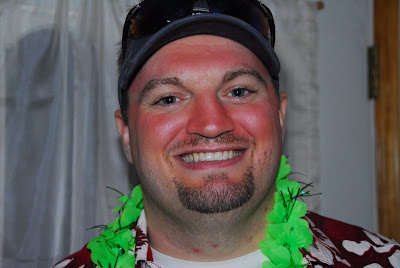 There is NO WAY I would just have an idea for the kids' costumes, buy what looked like enough fabric to my un-trained eye, and skip the pattern and just decide to wing it.

I did NOT decide to spray-paint Grant's sweats silver by using regular spray paint instead of fabric paint. I did NOT end up with a silver chair out of the deal. No way am I that daft that I would think that would actually work. Upon returning to the fabric store with plans for Toto's costume and the decision made that I was simply going to go buy duct tape to cover Grant's sweats with, I did NOT find silver satin costume fabric on a great deal ($1.98 a yard, if you must know) and decide to make him a whole new costume.

I may be crazy, but I am NOT that crazy.

I did NOT decide to cut corners on the whole project and instead of finishing the seams the right way, hot glue them instead. Really, who would be that lazy? NOT me! 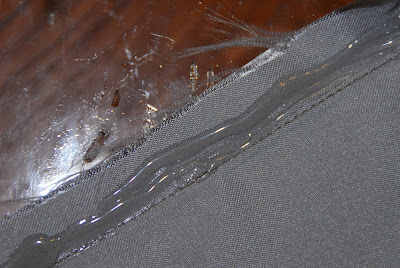 Mr. Darling Baby Drew did NOT decide that the time when Mama was a-sewing would be the best time to try out his new "crawling on things and standing" skills, in the attempt to give me a heart attack. 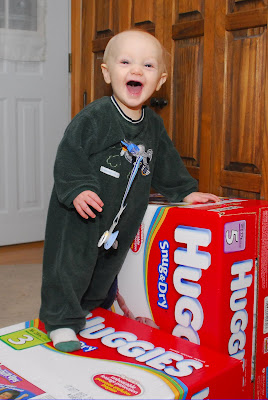 I did NOT actually finish all the costumes the day before Halloween, leaving me no last minute rush the morning of. Take that, HPS! (Yes, only a select few will get that one.) 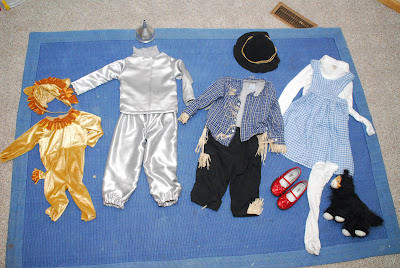 (Just so you know, the lion costume was purchased at WallyWorld. I had no hand in that one, except for pulling it out of the package. Thanks, Mom!)

We would NEVER think it was a good idea to skip the boys' naps and take the kids trick-or-treating all over town for ten hours. I mean, we know our kids are young, why would we even try?

I did NOT add up all the stops we made, and realized that we buckled and unbuckled kids from car seats 106 times. This didn't include Emma, who can do it herself.

I was NOT completely exhausted by the end of it all, but a happy exhausted, since we had had a great day.

I will NOT do it again next year, and I do NOT already have the wheels turning to see what I can convince the kids to be next Halloween.

I am NOT crazy!
- Tiff probably should have been cleaning at 10:24 AM

Hahaha, YES you are crazy! But I love it! Sounds like my life!

They were super cute! And the makeup on Marty turned out great!

How wonderful! Thank God you did NOT do all that. From the way Drew looks in that picture, he must be all better now, right? He's just the cutest little guy...

I love that you are into Halloween so much. I wish I had the idea to dress my boys in a theme when they were smaller - now they will have no part of it.
Those costumes look awesome - espeically the sun burnt tourist ;)

You have an award waiting for you on my blog.