Making Your Own Laundry Soap

I was blog-hopping a while back when I ran into Michelle Duggar's website. You know, the woman on TLC with eighteen kids? Yeah, her.

Well, she had a page with family recipes. Out of curiosity as to what it takes to feed a family of twenty, I clicked on it. And I found something cool.

She makes her own laundry soap. At first I was skeptical. Homemade laundry detergent? I had images of faded colors on my clothing and stains that would not come out. But then I thought a little more about it, and with eighteen kids, you kinda have to have clothes last to go through a lot of hand-me-downs, right? I started asking people if they had heard about it, and got a good response. Works great, natural instead of nasty chemicals, and cheap. Alright, I can go for that.

So I tried it. And of course, I took pictures. And I an going to blog it, because that's what I do. I don't ever want to steal someone's idea without giving them credit, though, so Michelle Duggar's link can be found HERE

The recipe (as copied and pasted from the Duggar website, since I am too practical to type it all out myself) is:

- Grate bar of soap and add to saucepan with water. Stir continually over medium-low heat until soap dissolves and is melted.

-Stir and fill a used, clean, laundry soap dispenser half full with soap and then fill rest of way with water. Shake before each use. (will gel)

I found Borax right away, at Target. Borax can be found basically everywhere. The soap bar and the washing soda were a little more difficult, though, but I was able to find the soap bar at Ace Hardware in Lynden, and they were able to order the washing soda in for me. You can get these easily online, but I like to shop local.

This is what I started with: 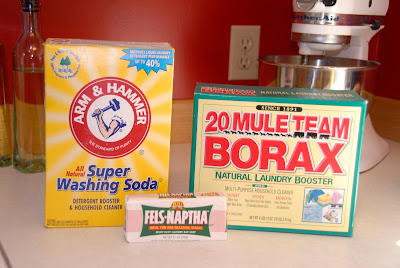 I used a regular cheese grater to grate the soap bar, and although the bar was hard and took a little effort to grate, it really didn't take long at all. 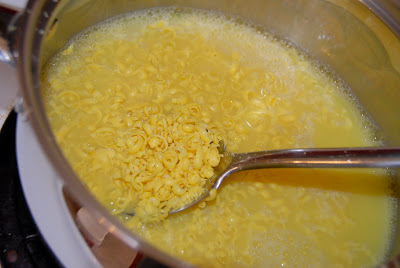 I added the water to the bucket, dumped in the melted soap, and filled it the rest of the way with water. Easy peasy, I was done. And a little disappointed that it didn't take longer, I was thinking I was going to be getting into making stuff, but it was over in about five minutes. 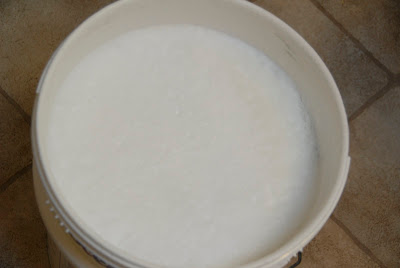 The next day, it was nice and gell-ey and looked like this. 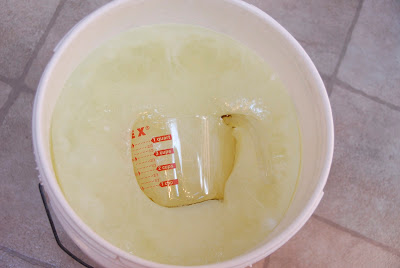 To be honest, filling the container was the hardest part. I would recommend stirring the contents of the bucket first to break up the gel, it will be easier to fill the laundry detergent bottle.

I bought enough stuff to make two batches of this, and it cost me less than ten bucks. Less than ten bucks for twenty gallons of laundry soap! I have been using it for a week, and it works just like my old, expensive stuff. We all have really sensitive skin in our house, (seriously, Emma was allergic to the chlorine in the tap water in our old house and would break out after every bath,) and it has not been a problem at all.

I would definitely recommend it!
- Tiff probably should have been cleaning at 9:30 AM

Wow, impressive! I may have to try that.

I have been using homemade powdered detergent for almost a year now. I made a batch of the liquid a few months ago and love it. I thought the same thing you did that it would take forever and be kiond of hard. I was amazed at how easy it actually was

seriously: not fair! I was planning my next post to be an ode to my laundry detergent! this is scary... and now I can't use my idea!

I am sooooo proud of you for doing this!! Thanx for being the guinny(sp?) pig :) I'm gonna try it too :)