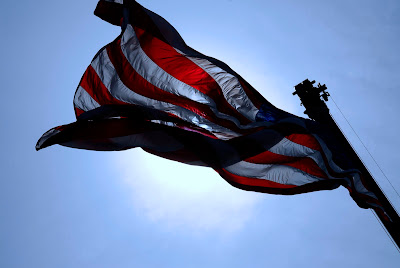 I love the fourth of July. We are a very patriotic family, we are so blessed to be American. I love my country, and the fourth brings out all the pride I feel for this great land of ours.

We did not do our traditional activities this year, we usually go to a parade with friends, but those friends were camping, so we skipped the parade and stuck around the county. My parents came up and we hit Zuanich Point Park for their festivities. They had bouncy castles, which Grant wanted no part of. Do you all remember this post? The one where Grant was totally freaked out by the bouncy castle? Yeah, he remembers it, too. And he spent the first ten minutes there eyeing the monstrous thing looming up ahead and saying, "Grant no want to bouncy. No castle. Grant no want to."

Once we convinced him we were not going to force him to bounce, he was OK and we had fun. There were a few games and booths, and then we walked and played. 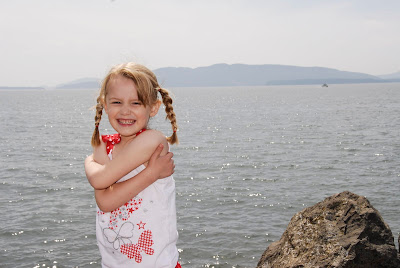 We hung out and listened to a great band. My Mom and Drew had a fun time together, and he loved the light wind in his face. 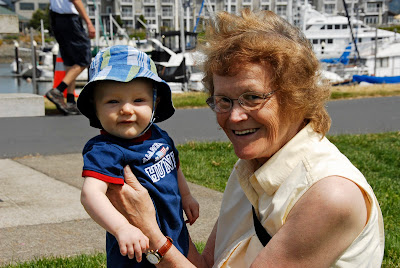 I took Emma to the bathroom, and Grant decided he wanted to go, too. Alright, first pottying attempt out of the house! And he actually went on the potty! WooHoo! I cheered him, and told him, "OK, when we get out there, you have to tell everyone else you went peepee on the potty!" I did mean everyone else in our group, but he seemed to miss that. As soon as we exited the building, he ran up to the first group of people he saw and yelled as loud as he could, "I went peepee on the potty!"

Luckily, it was a group of ladies who were obviously mothers, because they cheered and clapped for him. And he was thrilled.

Then we headed home for barbecued steaks and fireworks. This was the first year the boys were old enough to be involved, so they were very excited. Emma remembered sitting on the porch rail last year to throw pop-its, so we let them all do it this year. I think that was the best part of the day for them! 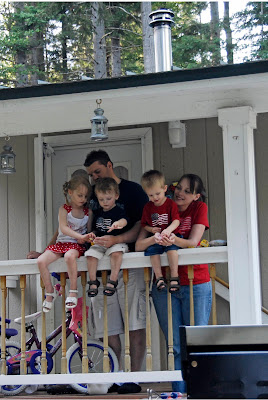 You know you have had a full, exciting day when you go to check on your kids a half hour after bedtime and find this. 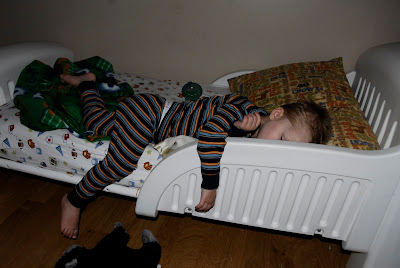 - Tiff probably should have been cleaning at 11:18 PM

Great pics!!! I can relate to the tell everyone you went potty comment. Of course Donnie always enjoyed when I had my boys watch Daddy go pee and then we clapped for him. That was always more fun for me and my kids than Daddy. It sure didn't help when I told Daddy what a big boy he was either. hehehe

I watched the fireworks from my back porch, and I thought they were a little bit, well, lame. I guess I expected more from Bellingham. My neighbors had a better display!

But, had I been there, I would also have clapped and cheered grant for peeing in the potty! Now that's big news!

That toddler bed looks familiar is it from Chris and Tim or is it another??? Just curious.

Dan, this bed was not from Chris and Tim, they were still using that one so I told them to keep it. We acrually found this one on facebook!