Today is my brother's birthday. I have talked about my brother here before, he is the computer genius that has fixed all of my computer issues. I think he is a fabulous guy, but it has not always been that way.

Growing up, we did not get along much at all. Yes, we were close in age, there are only nineteen months between us, but we had such different interests so there was not much common ground. I do remember making trails through the woods by our house with treasure maps for each other to follow, and playing FBI agent and hiding Monopoly money in the books in the living room as clues to some pretend crime. But he pursued his interest in Boy Scouts and being smart, and I paid attention to my looks and having lots of friends. To say that we did not have anything in common besides DNA would be a slight understatement. 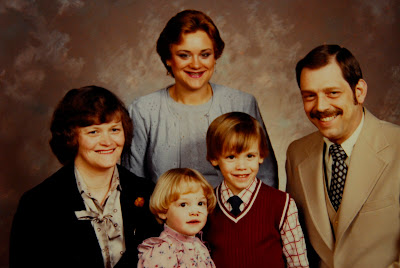 Here's a family picture from 1982. It may be hard to see as I am still doing the take-a-picture-of-the-picture thing, but this will have to do, since I do not have a scanner and would not know how to use one of I did. That's me, the cute little bowl-hair-cut blondie, with my brother, our parents, and our half-sister Jeannie. Wait, is that a band-aid across my nose? And the beginnings of a black eye? Why yes, it is!

This family picture was taken just a few hours after my brother decided to throw a brick at the neighbor girl. She was being mean to him, which she often was, and he picked up a brick and threw. The only problem was she and I were on the swings, so he threw the brick while she was in front, but by the time the brick arrived, she had swung to the back, and I swung forward to be met in the face with a brick. Jeff's first lesson in oscillating motion.

Oh, I have more stories about the horrors I faced at the hands of my brother, but I won't keep going. This is his birthday post, after all, and we don't need to go into why I had to have a root canal and a crown on my front tooth. Let's keep this upbeat, shall we?

I cannot sit here and play innocent the whole time, however. I may have, once or twice , put on cowboy boots, picked on him till he got mad, and then run away till he chased me and I might have stopped fast with my foot sticking out behind me so he would run into my heel. I might have done that. But I'm not admitting to anything.

We started to grow a little closer in our college years, then he met Miss Wrong. Get it? She was not Miss Right. Anyway, that relationship took a lot of his time and attention, and I moved up here and we drifted apart for a few years. A couple of years ago, he kicked Miss Wrong to the curb and ended up meeting Miss Right. We have both come to appreciate the value of our family, and although a hundred or so miles separate us, we do our best to stay in touch. We plan dinner once a month and he tries to join us on big outings, like the zoo.

I think he fits in well, don't you? 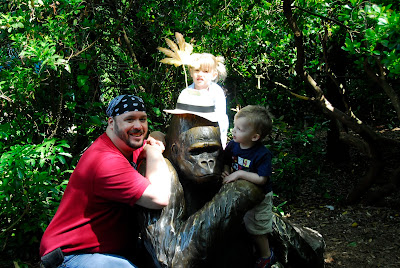 My brother is smarter than anyone I have ever met. He has a blog called Tragically L33t, and I read it, but I don't understand it. Click HERE and explain it to me, OK?

He married Miss Right a little over a year ago and I am so happy he did. She is wonderful and I love her, and they are so good together. I am really looking forward to years to come as we continue to grow close and have the relationship that we never did as kids. He is kind and giving, smart and funny, and confident and sure. He is an amazing man.

Happy birthday, Jeff! I love you!
- Tiff probably should have been cleaning at 2:33 PM

Congrats on your brother's birthday!!!

That is the most, well, original birthday wish I've ever seen. And I think you are still one of the funniest writers I've ever read. Your timing is impeccable. Please consider the book you're going to write. I recently read "Wishful Drinking" by Carrie Fisher, and she also has the touch.

Why does it show that I removed my comment? How stupid is that, I wrote it, I published it and then I removed it... why does it announce that for all to see?!?!

Happy Birthday Jeff :) Thanks for always being nice to me when we were in jr hi/hi school!!

Thanks for the awesome birthday wish, sister! I'm so glad I met your brother, my Mr. Right. =) I didn't have any sisters growing up, so I'm excited to have such a cool one now! Love you!