The Least of These

Spring has officially sprung here in the Pacific Northwest, and with that comes not only longer days and pretty flowers, but also the affects of those longer days and sunshine.  Namely, the ability to actually see the grime and gunk and algae that built up everywhere over the winter.

So, last week I hauled out the old pressure washer and got to work on the walkways and patio.  Every spring, I think "oh, this isn't too bad this year, maybe I'll just skip it this time," but I do it anyway and am always amazed at the difference.

Yes, that is the same way I have pressure washed before.  But it's different now.

Let me back up a bit.  Back in August, one of the things we did on our trip to Africa was stay at the YWAM (Youth With a Mission) base in Arusha, Tanzania.  We were there for the dedication of the Tumaini house, an orphanage that our church helped build; as well as a baptism of many of the Maasai people, including the chief of the Maasai tribe.  It was incredible, but that is a story for another day.

The particular situation I was brought back to when I was pressure washing was a time when we were relaxing.  Papa Cho, who ran the YWAM base also had built the New Vision school as a way to educate some of the local children.


To make a long story short, a man from Bellingham, Washington went to Tanzania and found street children playing with a soccer ball made of plastic grocery bags, and decided to make a difference.  New Vision Soccer was born as a ministry to the street boys of the area, and they built a full-sized, regulation soccer field and started the New Vision soccer organization.

We went to watch this team of amazing boys play, and they played a game against some of the members of our missions team. 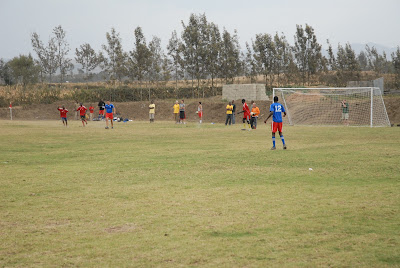 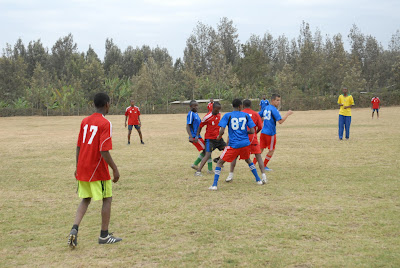 Some of our team from Christ the King Church played against these boys, and the rest of us sat and watched while the neighborhood kids swarmed us. 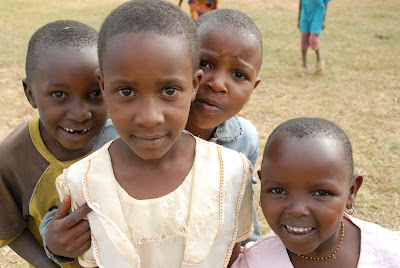 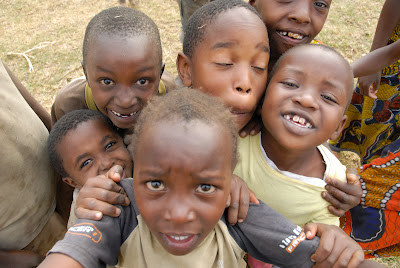 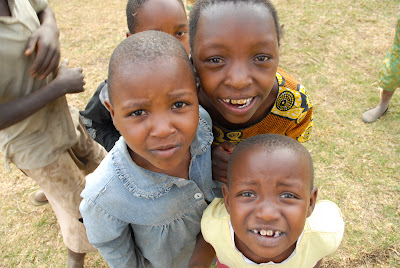 As was the case most of the time, the kids were thrilled with the chance to get their picture taken, and see their image in the back of the camera. 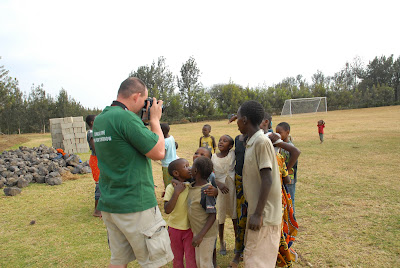 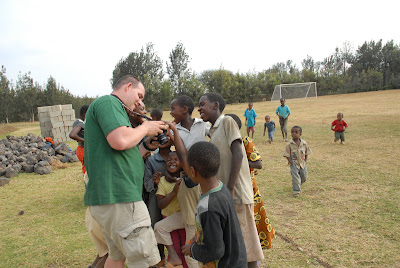 This is Adrain, hubby to the superbly awesome Lemonade Makin' Mama.

We sat with these kids, playing games, singing songs, and having a great time. 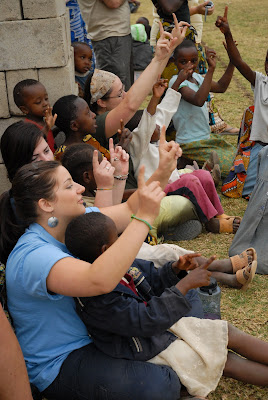 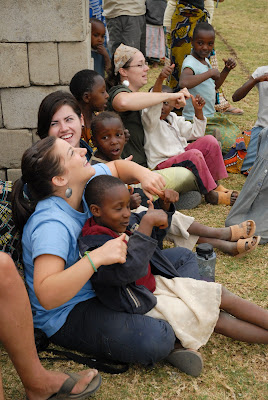 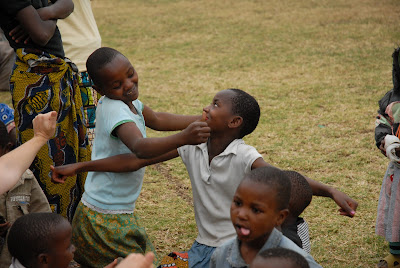 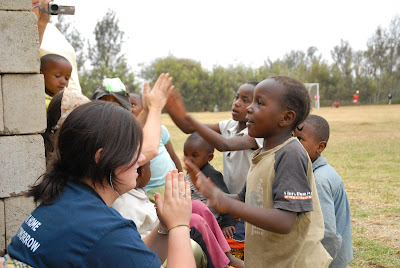 The kids were fabulous, as all the kids in Africa were.  Happy and joyful and just amazing.  However, they were thirsty, and we all had out bottles of water that we brought everywhere.  That was the hardest part.  We couldn't share our water, as we wouldn't have enough to go around and it wouldn't be wise anyway.  Many of these kids were sick, and tuberculosis was common.  Sharing water wouldn't help the kids, it would just spread disease.

The water they had was scarce.  A large reservoir filled with water was available for people to fill up jugs for their family, for a price.  Considering the average family lives on less than a dollar a day, the cost of water is high so it isn't something families have a lot of. 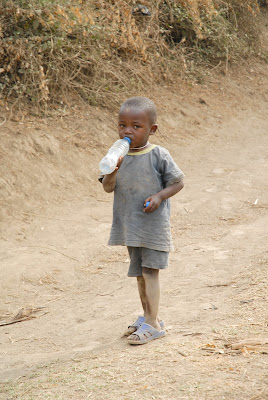 That which is available isn't of great quality, the kids' teeth are stained from what is in the water. 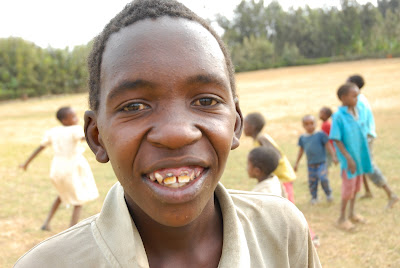 Here we were, surrounded by thirsty children.  And we had clean, pure water. 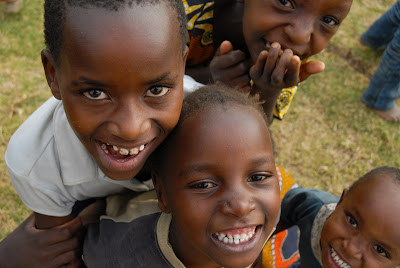 Matthew 25: 34-40
34 “Then the King will say to those on his right, ‘Come, you who are blessed by my Father; take your inheritance, the kingdom prepared for you since the creation of the world. 35 For I was hungry and you gave me something to eat, I was thirsty and you gave me something to drink, I was a stranger and you invited me in, 36 I needed clothes and you clothed me, I was sick and you looked after me, I was in prison and you came to visit me.’
37 “Then the righteous will answer him, ‘Lord, when did we see you hungry and feed you, or thirsty and give you something to drink? 38 When did we see you a stranger and invite you in, or needing clothes and clothe you? 39 When did we see you sick or in prison and go to visit you?’
40 “The King will reply, ‘Truly I tell you, whatever you did for one of the least of these brothers and sisters of mine, you did for me.’ 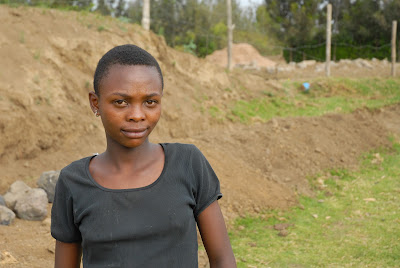 These are the least of these.  They were thirsty, and we could do nothing.

I stood on my patio, spraying pure, clean water to do nothing more than remove dirt and make it look pretty, and thought of these children and cried.  It still haunts me, that time where we sat with the least of these and weren't able to give them a drink.  I do know that we really couldn't have helped them, sharing our water would have brought them relief for a moment, but possibly have spread disease that would last.  In an area that couldn't afford medical care, that would be devastating. 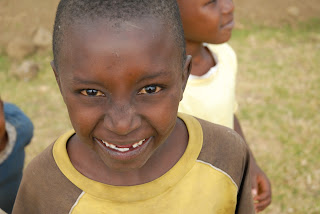 It was hard.  It is still hard, on days when the gas line at Costco is long, or someone is rude at the grocery store, or when our power goes out for a few hours.  It is hard to be frustrated in my selfish American way, and then the memories come back and humility sets in.

We live in an area that has so much, that some of our biggest inconveniences are waiting behind other wealthy people to buy whatever we want.

There was one little sweetheart in particular who touched me.  I never got her name, and I don't even know for sure if it was a girl or a boy, but the painted toenails make me think it was a girl.  She crawled up in my lap and cuddled close.  Some of these children are orphans, some live with grandparents or relatives or are passed from relative to relative as none of their family has enough money to raise them on their own.  Some live on the streets, where survival means following anyone who will feed you, so gangs and violence are common.

Safety is rare.  Security is hard to come by.

This little sweetie crawled up in my lap and within minutes, was sound asleep.  Amidst the hustle and bustle of the noise of the other children, the soccer game, and the rest of our team singing and dancing, she found security in my arms, even if only for a short while. 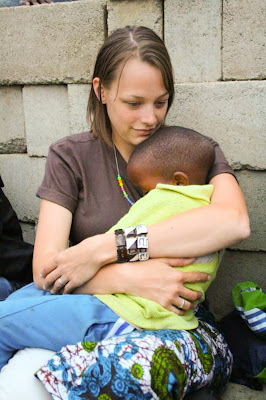 We didn't speak the same language, but some conversations don't require words.  So I held her.  I held her as my arms started to ache and fall asleep, not moving at all for fear of waking her.  I held her till the game was almost over, and her sister came and got her to take her back home, wherever that was.

I sprayed my patio, listening to the sound of the pressure washer and the rhythm of the sprayer cleaning off the concrete.  I remembered holding her, and although I couldn't give her what was obvious (water) I was able to give her something else.  I wonder if she remembers me at all, or if this was just another day in her difficult life.  I do know that I will never forget her.

And I will never look at pressure washing the same way again.

Be sure to visit New Vision Soccer's website here, and "like" them on Facebook.  This is an amazing organization bringing hope to children who have none.

Here's a link to a video New Vision made from the trip in August 2011:

- Tiff probably should have been cleaning at 12:49 PM

Thanks for bringing me instantly back. I miss those kids and look forward to going back soon.

I am sitting here moved to tears. You did it again.

Hi there, just stopping by to say how delightful your blog is. Thanks so much for sharing. I have recently found your blog and am now following you, and will visit often. Please stop by my blog and perhaps you would like to follow me also. Have a wonderful day. Hugs, Chris
http://chelencarter-retiredandlovingit.blogspot.ca/