Of Babies and Big Boy Beds

Yesterday morning at 6:14 am, my sister-in-law (and amazing boss) gave birth to her first child, my newest nephew. Welcome to the world, Justin Roy Parsons!

Let me tell you, he is a cutie. I went to the hospital for a quick visit and seeing him there, wrapped up in his mama's arms made my poor, retired uterus do a flip-flop. I'd like to think that it was because I love the newborn stage, where the sweet lil babe is so loving and dependent on Mom, there is no talking back or whining yet, and they don't run away.  To be honest, though, my uterus was just protesting any ideas that might have come into my head at that moment.  We are done having children of our own.  But bring on the nieces and nephews!

The kids were excited, they were not able to visit the hospital, but marveled over pictures of the sweet babe.  We were a bit concerned about Drew's reaction, he has been the baby of the family for close to three years now, and loves his baby status.

Yup.  We were worried about how he would feel, being replaced.

So I showed the kids the first texted picture as they woke up in the morning, and asked them, "do you know who this baby is?"  They studied the picture, faces pressed in close to each other and right up to the phone, and agreed that they didn't know.  "It's your new cousin Justin!  Auntie Amy had her baby this morning!"  They all squealed with glee, bouncing up and down, then returning to the phone to study him again.

We had quite a few talks throughout the day.  Talks about what babies do and what they can't do, like talking and walking and running and rolling.  What to expect from their new cousin, "Do you think you can play rough with him, or should you be very gentle?"  Ben: "Gentle, because he's just a little baby and we don't want to break him!"   Talks about different baby things, like volume and tickling.  I want them to be prepared to be the best cousins they can be.

Throughout the course of the day, Drew seemed to get it.  He wasn't a baby, he was a big boy.  And he wanted to do big boy things.  "Mommy, we get home, I wear big boy undies?"  "When we get home, you want to put on your big boy undies and go peepee in the potty?"  "Yeah!"

--Fast forward to after dinner.--

The rest of the evening was chaos.  There was something in the air that made small children scream, hit, throw things and tattle.  Drew spend quite a bit of time in time-out, throwing the biggest fit I have seen heard in a very long time.  Yup, even bigger than that annoying kid at the mall that you wish his parents would just take home because you are going deaf, and you are two stores down.  It was a huge, massive, sobbing, screaming fit that just wouldn't end.

Finally, I just scooped my screaming, fit throwing boy up, changed him into jammies, and put him to bed.

As many of you know, Drew sleeps in Emma's old crib (which was also Grant's old crib) with a crib tent that we bought him a while back to keep him in the crib.  The crib tent was awesome, and kept our little Houdini contained, which made for two happier parents, since we weren't constantly listening with one ear to see if we could hear him dancing on the crib rail again.  He got a concussion at nineteen months by climbing out of the crib, but we didn't want to move him to a toddler bed because he shares the room with his twin brothers, and the room isn't padded on all walls or completely empty.  However, the kids liked to climb in the crib tent and play, and a couple of weeks ago Ben broke the zipper on the crib tent so it didn't close anymore.  We solved that problem by turning the crib around so the opening was up against the wall, we just had to slide the crib whenever we got him in or out of it.  After four kids, you get creative.

Now, here's the thing.  Remember a couple of years ago when all those cribs got recalled and we were all supposed to get retro-fit kits to fix them?  Yeah.  Well, I got on the website of the manufacturer of our crib, and couldn't ever get the kit.  I entered the model number and the site said it wasn't a valid number.  Our crib was still in good shape, it was our fourth and final child, and he was over a year old and not at risk of the suffocation danger that prompted the whole recall in the first place, so I just didn't worry about it.  Over time, the crib started to weaken and I could see why it was recalled, so I tried again and still was told that it wasn't a valid number.  I could have just contacted customer service, but I never did.  Either I chose not to or I got distracted as something important was peed on, I don't know.  Either way, the crib was weakening, I didn't have the retrofit kit, and sliding the crib out from the wall all the time wasn't helping matters.

So I did what any caring, rule-following mother caring, loving mother of four kids would do.  I grabbed a bundle of zip-ties and zip-tied the rail to the support bars myself.  Problem solved!

Last night, after the joys of new babies and massive fits, I put my screaming, fit throwing boy to bed.  I don't know how he managed it (but let's be honest here, I never know how he manages to do the things he does) but he broke the zip ties and the whole side fell off the crib, sending it and my almost three year old to the ground.  Luckily, he was in the crib tent which managed to slow his descent and break the fall.  He wasn't hurt (thank the Lord) but the crib was broken.

I tried to fix the crib.  I thought I would just get a bunch of screws and screw the thing in place, it had zero value so who cares how it looks if it's just going to last another little while, right? But the screws weren't long enough to hold it strongly enough.

So, once again, I got creative.

I grabbed the duct tape.  I duct taped that sucker up, shook it a bit and got it nice and sturdy.  I was impressed.  I stood back and admired my work, and then it hit me. I was actually going to place my almost three year old in a crib that was held together with duct tape and had broken strands of zip-tie dangling from one corner?  Was I competing for some sort of Jeff Foxworthy special?  Was I an idiot?

And most importantly, if this fails, how on earth will I explain that at the ER?!?

Imaginary scenarios stared running through my head.  The doctor asked, "How did your child break his arm?"  and I have to answer, "well, his crib broke because I never got the mandatory retrofit kit for it, I just used zip ties instead.  Then the zip ties broke and he fell out, but I just duct taped it together again, I mean, really, duct tape is definitely designed to keep our furniture together to keep our kids safe!  Seriously, I had no idea that this wouldn't work."

And then, in my mind, CPS came to take my kids away and I was sent to a nice relaxing vacation in the psych ward.

I stared at the crib and sighed.  The crib is designed to be a toddler bed by removing the side rail that happened to fall off.  "Hey, buddy," I asked Drew, "how would you like to sleep in a big boy bed tonight?"

He was over the moon excited.  So we talked.  We talked about our expectations, that if he was going to be a big boy, he would have to stay in his bed and not get out to bug his brothers.

And he actually listened.

So proud of his new big-boy status that was created by the morning birth of his new baby cousin, Baby Jack Jack laid down his title of Baby and became a big boy last night. 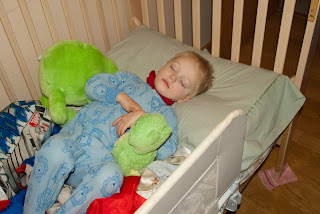 This morning, I was in bed when he came into my room for his morning snuggle.  As he opened my door, I realized that we had hit a "last" yesterday.  Yesterday morning was the last time I would hear, "Mommy!  I'm awake now, I wanna get up now!" in a fun singsong voice.

The baby stage is ending.

Calm down, uterus.  We've got other people's babies to hold now.


- Tiff probably should have been cleaning at 9:38 AM

I literally laughed out loud reading this. SO much of this sounds like me. I, too, have had moments of "thinking" I could resolve something before finally realizing that my thoughts were completely nuts. I, also have a 2 and a half year old who is my last.... Need I say more? And the uterus aches, I have had them lately. All three of my little ones are boys, so the thought of having a girl crosses my mind from time to time. Then someone throws a fit or (shockingly) surprises me with some craziness and I quickly snap back to reality. The reality that I am meant to have three boys. Nothing more, nothing less.

I thought the duct tape sounded reasonable...
Those lasts can be so bittersweet. My 11 year old is now taller than me. I realized today that I will no longer be able to pass down my clothes to her. She is bigger than I'll ever be and she's not even a teen...
Why so fast?

I know this post is a few months old, but DUDE I have never laughed out loud reading a blog before! This is THE funniest thing I have ever ever read...I have 4 kids and another due in August...so I can totally relate!!!

I literally laughed out loud:) thanks for sharing this for us.