I have been home from Africa for two weeks now. It has been hard to go through all the pictures, hard to recognize how truly amazing my life is and how incredibly wealthy I really am. It's a hard adjustment, coming home. And I think that's partially why it has taken so long to get these photos up for you all, although I know many of you have been waiting. Thank you for your patience.

We toured the Kibera slum with bodyguards, so we felt incredibly safe. However, many people are offended by having their photo taken, so I had my camera on the strap around my neck and shot from the hip, literally. 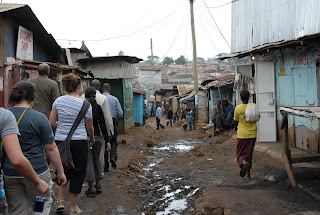 The Kibera slum is in Nairobi, Kenya. It is the second largest slum in the world, ten square miles of land housing one million people.

The vast majority of the residents have no services at all. No electricity, no running water, no sewer system. Nothing. There are a few stores with electricity, providing cell phone charging stations and batteries.

Most of the residents live on less than a dollar a day. Their homes are about ten feet by twelve feet, or the size of a standard bedroom. The living conditions that these people have to endure are not even fit for animals. 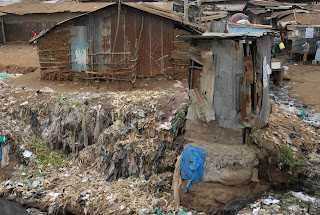 Kibera is considered an illegal settlement, so it thrives despite Kenya's housing laws. Slumlords rent out spaces for rent much lower than can be found in legal housing, so many of the residents have no choice in the poverty that fills the area.

The streets are covered in trash. Garbage piled up everywhere, with nowhere for it to go. 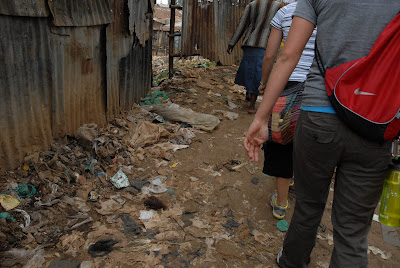 A river runs through the streets, filled with rotting trash and human waste. Since there is no sewer system, this is where one would pee. Poop is another story, they have "flying toilets" where one would defecate into a plastic grocery bag and fling it over one's head and throw it. Wherever it lands, it stays.

No one in our group got hit with a flying toilet on our visit, but I heard it has happened before. 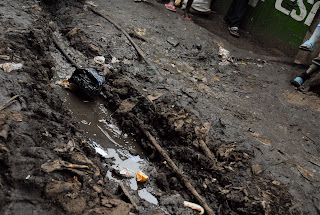 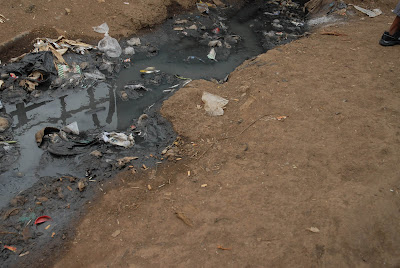 This is where the children play. They don't know any different. 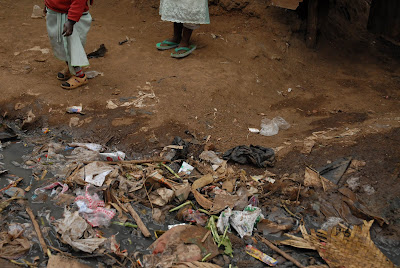 The children have such joy. Swahili is their first language, but English is the official language of Kenya so most are taught at least some English. One thing they all seem to know is "How are you?" The children flocked to us, asking, "Howa YOU?" 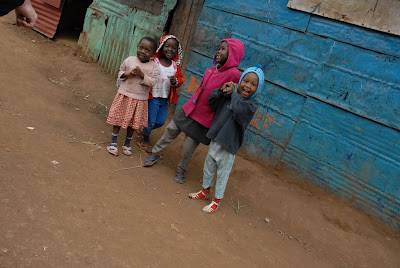 The walls of the homes are corrugated tin or mud pulled from the streets. Anything that can be used to create a wall, is used. 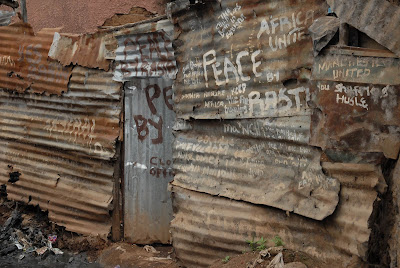 Many of the walls of the homes were filled with garbage and flying toilets. 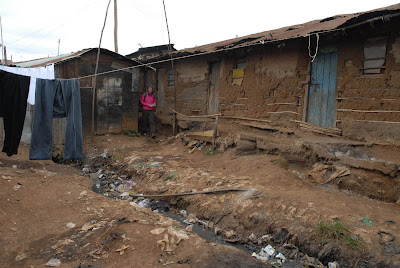 Roofs are constructed of tin, garbage bags, or trash. Anything that will keep the sun and elements out is fine. 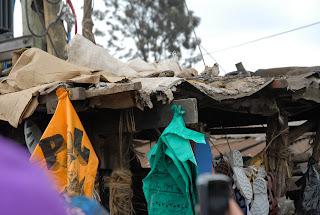 This is the first school we passed. The children were amazing, we laughed with them with tears in our eyes, the joy that emanated from them was incredible. 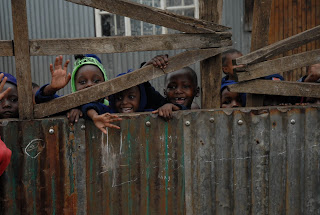 Such joy in a place of such sorrow. Parents working extremely hard to make something to sell in order to provide one meal a day for their families. 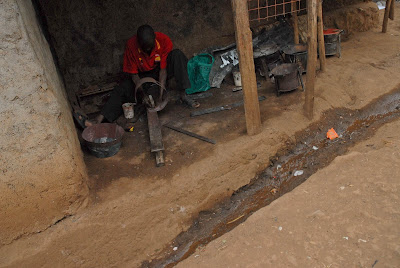 Sweet babies, just hanging out in the front yard. 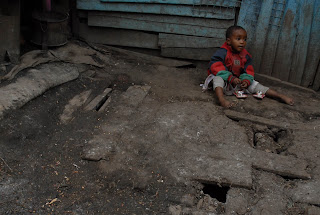 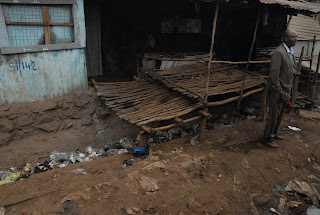 And everywhere you look, sweet children coming from everywhere to get a look at the mzungus (white people). 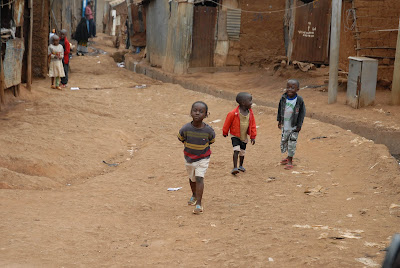 The lack of food is apparent everywhere. Dogs, lying in the streets, no energy from starvation. Some would pick through the food scraps in the streets, but anything edible has already been eaten. There is no waste. 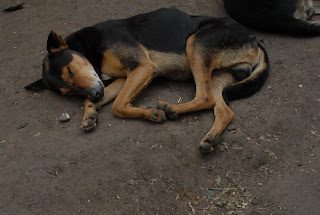 There are storefronts, with every necessary ware available. The residents of Kibera who do not work outside the slum have no need to leave the slum, ever. Many of the children have never set foot outside the sum before, and have never seen that the world is not limited to what you see here. 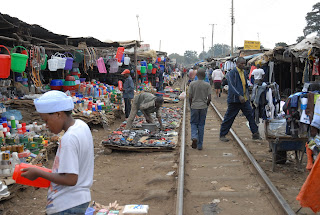 Shoes, 80 Kenyan shillings each. About $0.86 in US dollars. And yet, many of the children go barefoot, as their families cannot afford shoes. 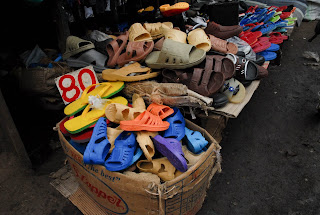 We rounded a corner and discovered this view. That's when it truly hit us that the ground was not covered in garbage, it was made of garbage. 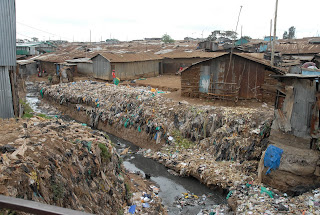 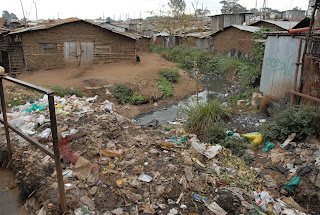 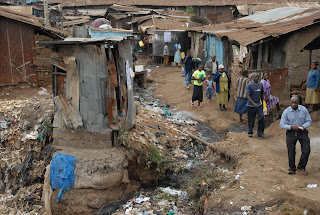 The difference between Kibera and America is astounding. These pictures are hard, but the reality of it is harder. This isn't just some National Geographic spread where you can look at the photos and close the magazine. This is real. Yes, you can hit the little red X in the upper corner of your screen, but that will only take the image from your mind, it will not erase the reality. As I sit here and attempt to tell these stories from my comfy office chair, glass of clean, pure water beside me, with my belly full of food; this is still there. These children are still in the slum, right this second.

Next week I will tell you of a bright spot in the midst of the darkness of the slum. There is hope in the desolation. And it lies here. 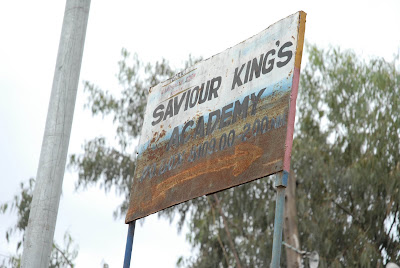 - Tiff probably should have been cleaning at 10:17 AM

This is powerful stuff, Tiff. You have to be changed on some fundamental level by your travels. Thank you for sharing your pictures, and I look forward to seeing a bright spot. This is very hard to read about.